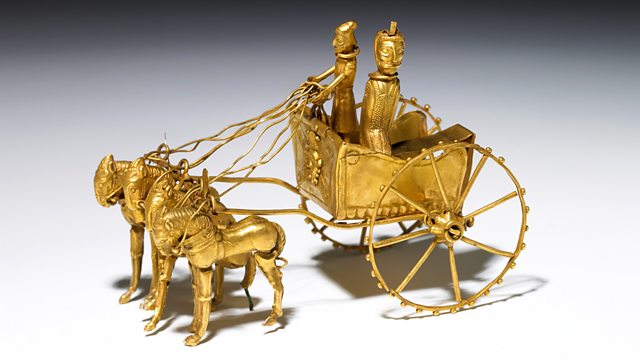 Neil MacGregor continues his history of the world as told through individual objects at the British Museum, with the tale of a great Persian king and a tiny chariot 2,500 years old.

Neil MacGregor's world history told through objects at the British Museum arrives in Persia 2,500 years ago. Throughout this week, Neil examines powerful leaders across the ancient world.

In this programme he focuses on Cyrus, the first Persian emperor who created the largest empire the world had ever known. It stretched from Turkey to Pakistan and required a hugely sophisticated network of communications and control. At the heart of the programme is a gold chariot pulled by four gold horses. This hand-sized model helps explain the rule of Cyrus, the 'king of kings', and his ambitions for his vast territory. How does this glorious pre-Islamic past sit with the people of Iran today?

With contributions from historian Tom Holland and Michael Axworthy, of the University of Exeter.

Parthenon Sculpture: Centaur and Lapith—The World in the Age of Confucius (500 - 300 BC)

This gold chariot comes from a hoard found near the Oxus river in Central Asia. It depicts a driver and probably a satrap - a governor of the Persian Empire. Satraps kept the peace, regulated the law and collected taxes in one of the empire's administrative provinces. The Persians built many new roads to enable communication and developed the first postal service. Religions freely intermingled in the empire and an image of the Egyptian dwarf-god Bes can be seen on the front of this chariot.

How was such a vast empire ruled?

Cyrus the Great transformed Persia from a small kingdom to the world's first superpower. The Persian Empire was the first to span three continents. Cyrus was a tolerant leader to those who submitted to his rule. He and his successors allowed their subjects to speak their own languages, practise their own religion and follow their own way of life. Rulers throughout history would be influenced by this 200-year period of Persian rule known as the Pax Persica (Persian Peace).

Networks of a vast empire

The image on the front of this chariot represents the Egyptian god Bes, who was adopted by the Persian religion and had a role as a protector.

Images of Bes and other deities were often used at this time on lynchpins to protect the wheels and the chariot, and therefore the lives of passengers. This is similar to the use of ‘protector eyes’ that some people have hanging in their cars today.

The use of an Egyptian god tells us something about the cultural and religious exchange across such a large and multi-cultural empire. There was a harmonious co-existence among the very different peoples within it based on respect, tolerance and dialogue between religions.

The chariot is also a reminder of the massive network of Persian roads and highways which connected remote places in the three continents of the Persian Empire, from Central Asia and India to Europe and Africa. These roads were extremely safe for travellers, even women travelling alone and were also used by merchants, by the military and by the first postal system in the world, called the ‘fast messengers’.

We can’t be entirely sure why this chariot was made. It could be a work of art commissioned by an official, a votive object dedicated to a temple as a religious offering, or it might have been a toy, belonging to the children of an aristocratic family.

Whatever its purpose, the chariot tells us a lot about local metalwork at the time as well as revealing something about artistic and cultural exchange within the Persian Empire as a result of transport, road systems and trade.

How was this tiny chariot made?

This tiny gold model is a very complex work of art whose small size and fineness displays the outstanding level of craftsmanship of the goldsmith who created it.

It is made from an alloy of gold, copper and silver. Several microscopic shiny grey inclusions containing iridium and osmium are embedded in the gold of the bodies of two of the horses. This is typical of gold panned from river sands. The amount of copper, however, is too high to have come with the gold, so it must have been intentionally added by melting the two together. Gold is a very soft metal and the addition of copper hardens it, making the chariot sturdier.

The two men and four horses are hollow. The goldsmith made them from many pieces of gold sheet cut out and soldered together. This used much less gold than a solid casting, but required great skills to create the delicate forms.

He must have created each half of the bodies by hammering pieces of gold into shaped moulds, and added the features on the men’s faces and details like the horses’ manes and heads with a fine tool. The tails and legs of the horses were mechanically inserted and soldered to the horses’ bodies.

To make the chariot the craftsman hammered a single sheet of gold flat, then cut it and folded it to the required shape. He used twisted wires both with round and square sections to produce the reins, the rim and spokes of the wheels. The poles linking the chariot to the yoke are solid gold hammered into round section wires. The two wheels are connected by a wire which runs underneath the chariot and enabled the wheels to turn; a particularly difficult and fiddly part of the work.

Only through scientific investigation have we found the evidence for the skills and art of the anonymous ancient goldsmith in producing a combination of very fine gold working techniques and an exquisite object.