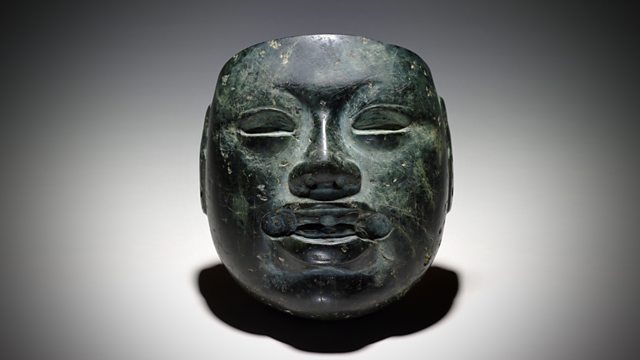 Neil MacGregor's global history told through objects arrives in Mexico before the time of the Maya or Aztecs. He tells of a forgotten people, the Olmec and the extraordinary masks.

Neil MacGregor, in his history of mankind as told through objects at the British Museum, selects a miniature mask to tell the story of the Olmec - the mysterious people of ancient Mexico who lived before the time of the Aztecs or Maya.

As the Parthenon was being created in Greece and the Persians were expanding the world's biggest empire, what was life like for the "mother culture" of Central America? Neil explores the life of the Olmec and visits the remains of one of their greatest legacies. He considers their remarkable skills in mask making with the Olmec specialist Karl Taube and the Mexican novelist Carlos Fuentes.

This Olmec mask was worn around the neck as a pendant. It may have provided the wearer with a new identity as an ancestor or deity - perhaps as the Olmec rain god. The distinctive toothless, down-turned mouth and infant-like face are typical of Olmec art. The ears are perforated and the mask may have originally been decorated with piercings. On either side of the mouth are two Olmec glyphs (picture signs). Olmec glyphs are the earliest known writing in America.

What is the legacy of the Olmecs?

The Olmecs are the earliest Central American civilisation and laid the foundations for subsequent societies. Features associated with the Mayans and Aztecs such as stepped-temples, the ceremonial ball game and complex astrological calendars all originated with the Olmecs. The apparent collapse of the Olmec civilisation is still not well understood. Their decline may have been caused by the overpopulation of the fragile tropical river valley environment, a volcanic eruption, or a shift in the flow of the area's rivers.

By Professor Karl A. Taube, Department of Anthropology, University of California

For the Olmec, we have many stone masks. Some were clearly made to be worn as masks with perforations for the eyes, but the scale of this one and the fact that the eyes are not pierced suggests it was probably an ornament of jewellery.

The Olmec created great sculptures in fine material and this stone mask is one example. Probably what they were greatest at working with, in terms of materials, was jadeite - a very rare stone not even native to the Olmec area. We now know, as a result of Hurricane Mitch, that they were obtaining their material way over in Motagua Valley in Eastern Guatemala, about 300 miles away.

Jadeite is an incredibly hard stone to work, it’s denser than quartz, and they had no metal tools, so it was simply by abrasion and scratching and finally polishing that these remarkable objects were made. They are so beautifully made it’s almost like they’re moulded in plastic, but this was a heck of a lot of work.