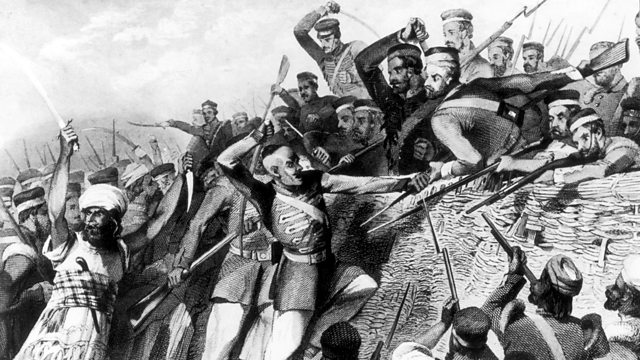 Melvyn Bragg and guests Faisal Devji, Shruti Kapila and Chandrika Kaul discuss the Indian Mutiny of 1857 and the rebellion which followed.

Melvyn Bragg and guests Faisal Devji, Shruti Kapila and Chandrika Kaul discuss the Indian Mutiny of 1857 and the rebellion which followed.On 10th May 1857 Indian soldiers from the Bengal section of the East India Company's army rose up and shot their British officers. By nightfall the troops had marched on Delhi and the aged Mughal emperor Bahadur Shah II had been nominally restored to power. Nearly 15 months later, after great violence on both sides, the revolt was suppressed, but it left British rule in India transformed and, arguably, doomed.The trigger for the Mutiny was a rumour that cartridges for the new British rifles were coated with pig and cow fat, thereby insulting both Hindu and Muslim troops. But the Indian Rebellion was also a more complex story of economic strains, religious insensitivity and well-intentioned but provocative liberal reforms.The events of 1857 have resonated through history and have been appropriated and mythologised by the British press and Indian nationalists alike. However, the shocking violence of the Rebellion on both sides has meant that it has defied attempts to fit it into a coherent narrative structure. It has overshadowed British foreign policy and Indian politics ever since.Chandrika Kaul is Lecturer in Imperial and Indian History at the University of St Andrews; Faisal Devji is University Reader in Indian History at St Antony's College, University of Oxford; Shruti Kapila is University Lecturer in History and Fellow and Director of Studies at Corpus Christi College, University of Cambridge.