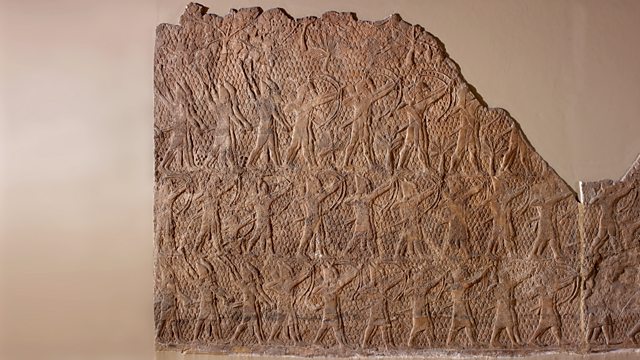 Neil MacGregor entounteres the huge stone carvings that describe an epic seige in Judah in 701BC.

Neil MacGregor's history of the world told through objects from the British Museum in London arrives at the Palace of Sennacherib in Northern Iraq.

Throughout this week, Neil MacGregor explains the key power struggles taking place across the globe around 3000 years ago, as ambitious new forces were building sophisticated new societies. It seems that war has been one of the constant themes of our shared human history and, in this programme, Neil MacGregor tells the story of the Assyrian king Sennacherib and his bloody siege of Lachish in Judah in 701 BC. The siege is described unsparingly in giant stone carvings that were placed around the king's palace and that show, perhaps for the first time, the terrible consequences of war on civilian populations. The Assyrian war machine was to create the largest empire that the world had ever seen and used the terror tactic of mass deportations. Statesman Paddy Ashdown and the historian Anthony Beevor both reflect on these powerful images of war.

The Lachish relief depicts the Assyrian army laying siege in 701 BC to the town of Lachish, about 40 kilometres from Jerusalem. Soldiers storm the town walls while prisoners are marched out of the town into exile. The relief was created for the walls of the great palace of the Assyrian king, Sennacherib, in Nineveh. Such scenes demonstrated the consequences of rebelling against the Assyrian empire. Sennacherib is shown as an invincible king presiding over a perfect victory.

Were the Assyrians war-like?

The Assyrians were renowned for their military successes yet they initially developed a strong army as a means to defend themselves. The Assyrian heartland has no natural defences and was vulnerable to attack. Soon the Assyrians had conquered an empire stretching from Egypt to Iran. Lachish was just one city that fell in a long series of wars that saw many people shifted from their homelands and put to work on such projects as building Sennacherib's palace.

Why put war on the palace walls?

The Assyrians were no more brutal and war-like than other people. Yet warfare is a recurring theme in their art and texts.

The intention of the imagery was to present a believable and realistic view of their world. This was in contrast to the art of Classical Greece, which masked conflict by setting it in a mythological time and place.

The Assyrian kingdom had no natural boundaries and the fertile lands around the river Tigris attracted both mobile pastoralists and neighbouring powers. Assyria’s rulers were therefore forced to protect their lands. Their armies pushed invaders beyond their territories, bringing them into other potentially hostile states.

Warfare was considered a religious duty. At his coronation the king swore to extend the land of the national god Ashur, who demanded stability and order. So the imagery of battles and sieges that the line the palace walls should be understood not only as statements of power but as statements of a religious responsibility which was achieved with divine support.

By 700 BC the Assyrians had created an empire stretching from the borders of Egypt to the Persian Gulf. Their world view had expanded with their territories and the imagery in the royal palaces was adapted accordingly.

Earlier symbolic images of conquest and triumph were replaced by representations of the defeat of actual enemy tribes, cities and individuals. The depiction of diverse landscapes with entire backgrounds filled by details of vegetation and physical features represent the varied world controlled by Assyria.

In addition, the reliefs powerfully express the ease with which the Assyrian king is able to traverse difficult terrain and obstacles like rivers, and to punish and humiliate rebel kings who had opposed the divine order of the world by effortlessly conquering their heavily fortified cities, such as Lachish in Judah.