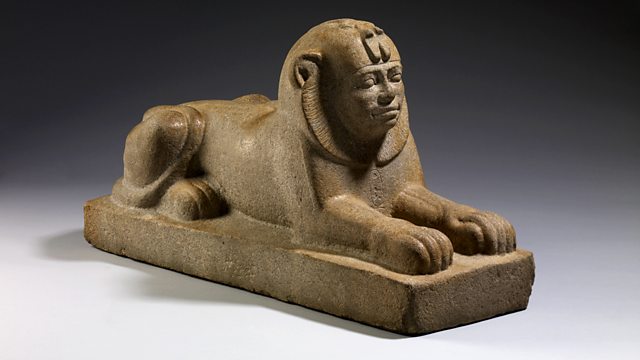 This week Neil MacGregor describes the movement of great powers around the globe some 3000 years ago. Today, how Egypt was conquered by Sudan and the black sphinx that proves it

Throughout this week, Neil MacGregor is describing power struggles across the globe around 3000 years ago, as ambitious new forces set about building sophisticated new societies - from the Middle East to South America.

Today he describes what was happening along the River Nile and how a powerful new king conquered Egypt from Sudan. His name was Taharqo and he ruled from a vibrant new civilisation (in modern day Sudan) called Kush. These days few people even know that the mighty land of the Pharaohs was once ruled over by its southern neighbour. The evidence is summed up by a sculpture at the British Museum that shows the ruler from Kush as an Egyptian sphinx.

Sphinxes are traditional Egyptian icons but this sphinx has the face of a Sudanese man. It is modelled on the face of King Taharqo - one of the greatest leaders of the kingdom of Kush in modern-day Sudan. Taharqo was one of several Kushite pharaohs to rule Egypt. They created a hybrid identity combining Kushite and Egyptian traditions in order to govern their new empire. The two cobras on the headdress may signify that Taharqo ruled two kingdoms - Kush and Egypt.

How did Sudan conquer Egypt?

For thousands of years Egypt exploited the raw materials of Kush but in 728 BC the balance of power changed. Egypt had become fragmented and the Kushites marched north and captured city after city. The Kushite pharaohs imposed a strong government in Egypt, pursued an active foreign policy and stimulated a revival in art, architecture and religious practices. The Kushite reign in Egypt came to the end after they were defeated by the Assyrians.

One of Jebel Barkal’s greatest sons

Just below the great river bend of Abu Hamed Sudan, the Nile flows in a south-westerly direction through the rugged rocks of the basement complex of the fourth cataract.

The river then enters the low sandstone hills of the Nubian Desert. This is a dramatic landscape: a ribbon of water (the Nile) bordered on both sides by several hundred metres of green cultivation that suddenly give way to the vast wilderness of the desert. The plain is dominated by the ‘sacred’ flat-topped mountain of Jebel Barkal.

This is the homeland of the Kushite king and pharaoh of Egypt, Taharqo (690-664 BC), the ‘author’ of this sphinx statue and of thousands of other masterpieces excavated at many sites in Egypt and Sudan.

Most recently, a colossal granite statue of the king was unearthed at Dangeil Sudan, near the fifth Nile cataract.

Taharqo is the most popular and well-known Kushite king and most Sudanese school children have heard of him. He ruled a vast territory that extended from the Mediterranean and the frontier of Palestine, southward to the African savanna and is the only king from the Middle Nile region mentioned by name in the Bible’s Old Testament.

Like Taharqo, who brought his mother all the way to Egypt to watch his coronation as pharoah, the present inhabitants of the Jebel Barkal region are still famous for their strong family ties. This is well-illustrated in the local poetry and songs. As a son of Jebel Barkal, I like very much the idea of having Taharqo as my grandfather. I feel proud whenever I hear my archaeologist friends remark that my facial features resemble those of Taharqo.

Taharqo’s sphinx, a masterpiece of Kushite art, was found during the excavations of the Archaeological Mission of the University of Oxford at the site of Kawa (Gematon), Sudan during the 1930s.

Now in the British Museum, the sphinx eventually crossed the Mediterranean to Europe around 2,600 years after Taharqo’s death, where it remains a testimony to the power, might, vigour and dynamic nature of Taharqo, one of the greatest of Kushite kings and son of Jebel Barkal.

The sphinx of Taharqo was one of the most spectacular finds of the Oxford Excavation Committee’s excavations at the town of Kawa between 1929 and 1931.

Kawa, known as Gematon, was probably founded by the Egyptian pharaoh Akhenaton in the fourteenth century BC. In Taharqo’s day it was an important town on the banks of the Nile with several temples, one built by the pharaoh Tutankhamun.

Taharqo had been shocked to see the state of one of these temples when he passed through the town in around 700 BC on his way north to take command of a Kushite and Egyptian army and he vowed to rectify the situation. Between 684 and 680 BC Taharqo kept his promise and built a large temple dedicated to Amun, the chief god of Kush and Egypt.

For a number of years we’ve been excavating at the town and have more recently uncovered a small mud-brick shrine decorated with fine wall paintings depicting the king before Amun and containing an altar bearing the throne and birth names of Taharqo. A number of houses have also been investigated as well as an impressive kiln.

Less than a kilometre to the east many graves have been excavated in the cemetery associated with the town. These graves usually have a steep flight of steps leading down to a chamber three metres below the surface. Many graves contain multiple burials and were opened and reused on several occasions.

On the surface the tombs were marked by tumuli (burial mounds), by mastabas (flat-roofed, rectangular structure with sloping sides) or by pyramids. The largest pyramid excavated so far is built of cut sandstone blocks and is approximately 10.4 metres square with a small funerary chapel attached to its eastern side.