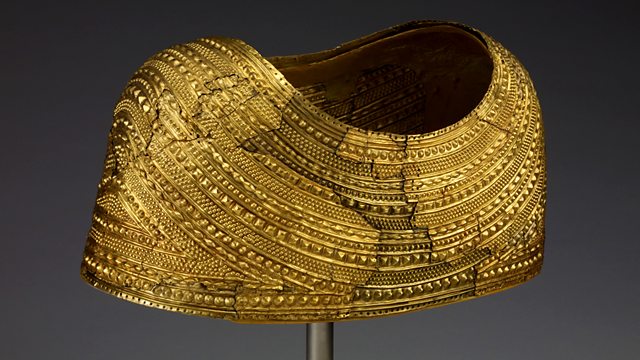 The world of 1700 BC explored through surviving objects. Neil MacGregor describes a remarkable gold cape now at the British Museum but discovered by quarrying workmen in Wales.

Director of the British Museum Neil MacGregor retells the history of human development from the first stone axe to the credit card, using 100 selected objects from the Museum.

Neil MacGregor continues to explore the world of around 3,600 years ago through some of the most powerful objects that remain - discovered in modern day Iraq, Crete, Egypt and now Wales.

In 1833 a group of workmen were looking for stones in a field near the village of Mold in North Wales when they unearthed a burial site with a skeleton covered by a crushed sheet of pure gold. Neil tells the story of what has become known at the British Museum as the Mold Gold Cape and tries to envisage the society that made it. Nothing like the contemporary courts of the pharaohs of Egypt and the palaces of the Minoans in Crete seem to have existed in Britain at that time, but he imagines a people with surprisingly sophisticated skills and social structures.

This gold cape was originally found in a grave in North Wales. It has been crafted from a single gold ingot beaten to a breathtakingly thin sheet. We do not know who wore the cape but it could only fit a slim woman or child. Whoever wore it must also have possessed great power and wealth. This wealth may have been generated by the nearby Great Orme - the largest copper mine in north-west Europe. This would have been a major trading centre for prehistoric communities.

How did people live in Bronze Age Britain?

When this gold cape was made people in Britain did not live in permanent villages, nor did they build cities or palaces. Bronze Age Britons lived in socially fluid communities moving with their herds and possessions through the landscape, burying their dead in round barrows. Despite not living in cities or a state they were capable of creating incredibly sophisticated objects like the Mold Gold Cape. Individual communities were connected by an extensive trade network that spanned north-west Europe.

Who wore this cape?

When a spectacular object is found buried with an individual, the usual assumption made is that the person must have been a male adult – perhaps a warrior, a chief or religious leader. This is what people first thought when they found the fragments of the Mold Gold Cape.

It was only through painstaking reconstruction over many years by Ian McIntyre in the British Museum that this idea was challenged. The cape in its final form was far too small to be for a man – it would only fit a petite lady or a child.

The skeleton was lost soon after it was found by workmen, so we will never know its gender. But it’s a good reminder that archaeologists always interpret the past with the prejudices of the present. Our vision of what societies were like in the Bronze Age changes with new discoveries such as the Mold Gold Cape.

The cape is unique – there is really nothing to compare it to in the whole of Europe. This makes it more difficult to understand why it was made and what significance it had.

The impression given by the design is that the cape was trying to imitate strands of beads slung over the shoulders. There are small holes along the neckline and body of the cape so we can assume that it formed part of a bigger costume.

When worn, it would have restricted how you could move and it surely must have only come out for special occasions. What those occasions were we will never know.

When really stuck for an idea of what an object was used for, archaeologists tend to say ritual – how about I say that the Mold Cape was ceremonial!