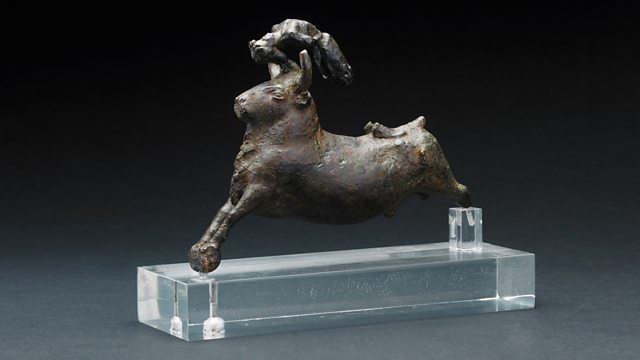 Neil MacGregor's history arrives at a Minoan treasure and a particularly strenuous hobby from 1700BC.

Neil MacGregor's retelling of the history of humanity, using objects from the British Museum's own collection, arrives in Crete around 1700BC. The programme tells the story of man's fascination with bulls and the emergence of one of most cosmopolitan and prosperous civilisations in the history of the Eastern Mediterranean - the Minoans. The Minoans of Crete were more powerful than the mainland and enjoyed a complex and still largely unknown culture. They enjoyed a ritual connection with bulls as well as with a rich bronze making tradition. To consider the Minoans and the role of the bull in myth and legend, Neil MacGregor introduces us to a small bronze sculpture of a man leaping over a bull, one of the highlights of the British Museum's Minoan collection. He explores the vast network of trade routes in the Mediterranean of the time, encounters an ancient shipwreck and tracks down a modern day bull leaper to try and figure out the attraction!

This bronze figurine depicts a man somersaulting over a bull. It comes from the island of Crete and was probably used in a shrine or a cave sanctuary. Bulls were the largest animals on Crete and were of great social significance. Bull jumping was probably performed during religious ceremonies, although a leap such as this would have been almost impossible. In Greek myth, Crete was the home of the labyrinth and the fearsome Minotaur - half bull and half man.

Who were the Minoans?

The Minoan people of Crete built magnificent palaces, developed systems of writing and were able to make tools and sculptures from bronze. Crete had no natural sources of copper or tin to make bronze however, and relied on an extensive maritime trade network to obtain these materials. The Minoans were proficient sailors and traded with Egypt, Greece and the Middle East. Trade also spread Minoan ideas and art around the Eastern Mediterranean.

Connecting to the past in shipwrecks

The small bronze statuette from Minoan Crete, unique as it is, is also a very good indicator of this key commodity, bronze, that was sought after throughout the eastern Mediterranean.

Bronze is essentially made up of copper in large quantities and tin in smaller quantities, and it was bronze that underpinned the incredibly complex and expansive trade networks that developed across the eastern Mediterranean in the Late Bronze Age. This trade depended on sophisticated ships and a deep knowledge of the sea by their sailors.

The evidence we have for this trade is in the form of imported artefacts that we find around the coastlines and the islands of the eastern Mediterranean in this period. Unfortunately there is only a limited number of shipwrecks to substantiate these trading activities but one of the most important shipwrecks that we have is that of the Uluburun. This was a vessel that sank off the Turkish coast 3,400 years ago.

The Uluburun was carrying 15 tons of cargo, nine tons of which was copper, copper in the form of ingots, which was the essential raw material to make up bronze. In addition to the copper ingots the Uluburun was carrying a very rich cargo, not only of additional raw materials such as glass, but amber from the Baltic, pomegranates, pistachio nuts and olives. Organic materials rarely survive on land. But in an underwater context when they’re buried in the sediments these organic materials will survive.

So, a shipwreck gives us an insight into elements of trade that are lost in the terrestrial archaeological record. In addition there is also a wealth of manufactured goods, including bronze and gold statuettes, beads, tools and weapons. There was even a wooden diptych, the first form of filofax, that would have been carried on board with wax inside where they would have kept a note of the different cargoes that were being exchanged.

Shipwrecks show just how connected the different cultures of the Bronze Age Mediterranean were and, most importantly, were connected by sea.

Before humans settled on Crete in about 7000 BC, there were no bulls on the island. Instead, now-extinct species of deer and dwarf hippos and elephants thrived, free from natural predators.

It is not known whether humans ever encountered these strange creatures, but we do know that the settlers brought more familiar animals with them in their boats: cattle, pigs, sheep and goats.

These domestic animals took the place of the earlier herbivores, and bulls became the largest and most dangerous animal on the island. It is no accident, then, that bulls came to take a prominent place in the art of Bronze Age (Minoan) Crete.

The Bronze Age began in about 3200 BC on Crete, marked by the arrival of bronze tools and weapons. Bronze came to be used for objects such as this bull-leaper.

However, the first known representation of something similar to bull-leaping is a clay vessel dating to before 2000 BC, now in the Heraklion Museum in Crete. It shows a bull with small clay figurines of humans hanging on to its horns. There is an exaggerated difference in size between bull and humans – the bull is very large and the humans much smaller - perhaps indicating the difficulty in controlling these animals.

This feat is at the heart of bull-leaping, although it appears to have become more of a staged performance than a practical part of farming animals.

Bull-wrestling and bull-leaping are more frequently depicted in the period of the Minoan palaces, particularly from 1700 BC. Scenes of bull-leaping are known from sealstones and gold rings, and also the preserved clay impressions of such objects. These were found in the palace at Knossos, along with frescoes (wall-paintings) of bull-leaping and an ivory model of a bull-leaper.

Records from Crete show that cattle were also used for farming. Tablets written in the Linear B script that were created by Knossos administrators give the names, or at least descriptions (White Foot, Ugly), of plough oxen (castrated bulls).

Yet ploughing was never shown on frescoes or sealstones at the palace at Knossos. Instead images of the staged performances with cattle demonstrated the metaphorical control of the palaces over these animals.

Fantastic bulls, such as the famous Minotaur, were to become a central part of the later mythology surrounding Crete. In the Bronze Age, however, bulls and cattle were seen as large, valuable and potentially dangerous animals: controlling them was central to Minoan society.