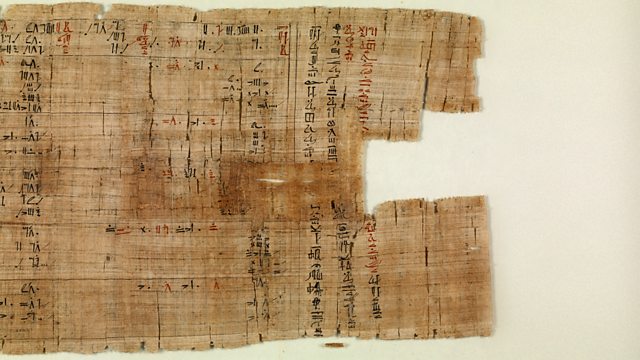 In a week that explores man's new-found self expression through words and numbers, Neil MacGregor describes the British Museum's most famous mathematical papyrus.

The Director of the British Museum, Neil MacGregor, retells the history of human development from the first stone axe to the credit card, using 100 selected objects from the Museum.

In a week that explores man's early experiments with numbers, Neil describes the British Museum's most famous mathematical papyrus. This shows how and why the ancient Egyptians were dealing with numbers around 1550 BC. It contains 84 different calculations to help with various aspects of Egyptian life, from pyramid building to working out how much grain it takes to fatten a goose. Neil describes it as 'a crammer for a dazzling career in an ancient civil service'.

This is the most famous mathematical papyrus to have survived from Ancient Egypt. It contains 84 different mathematical problems - such as how to distribute 100 loaves of bread among a workforce in different ratios. Such skills were constantly needed by scribes - the administrators of the Egyptian society. This papyrus was placed in its owner's tomb as a sign of his highly educated status. Papyrus documents are made from the papyrus reed, which is common in the Nile valley but relatively expensive.

Why did maths first develop?

Complex societies like Egypt required maths to create buildings, manage food supplies and compute the flood levels of the Nile. The Egyptians were renowned by the Greeks as masters of geometry. However, very little evidence of complex Egyptian mathematics survives. Mathematics also developed in Mesopotamia, including the system of dividing time into units of 60 that is still used today for minutes and seconds. Higher maths, such as deductive reasoning and logic, developed in Greece from 500 BC onwards.

How has papyrus survived?

Papyrus was used to write on in ancient Egypt and was used until the eighth century AD when it was replaced by the paper we are familiar with today. A remarkably large number of papyri from antiquity have survived, including the Rhind Mathematical Papyrus which is almost 4,000 years old.

There are several reasons why papyrus documents have survived so well.

Firstly, the way papyrus ‘paper’ was made was relatively simple which helped retain the purity of the plant material. It was made from strips of pith from inside the papyrus plant. A layer of horizontal strips was laid on top of a layer of vertical ones and the two layers were bonded together by pressing. When dry this made a sheet on which to write.

Also the dry climate in Egypt and the tradition of placing papyri in tombs helped to preserve them. Tombs especially have protected the documents by acting as a kind of ‘buffer’ against the fluctuations of temperature and the relative humidity outside, even if they could not protect them from insects or tomb robbers.

Despite their remarkable durability, today many of these ancient documents are very fragile. A conservator has to work out how to make the object available to the public while keeping it in a safe and stable environment. The Rhind Papyrus presents such a problem.

It is made up of two parts, each kept separately between two pieces of glass. The Rhind papyrus is especially delicate as it was a working document 4,000 years ago and had a lot of use. It was also re-written on which meant that the first text had to be rubbed out, making the surface extra fragile today.

When the Rhind Papyrus first came to the British Museum in 1865, one of the pieces was displayed in the Egyptian galleries in direct light. This was before it was understood how damaging light can be to plant and animal materials. Today, this part of the papyrus is too fragile to be on display. Fortunately, the other part of this remarkable manuscript is in better condition and can be displayed under suitable lighting conditions in the Museum.

Reading the texture of ancient lives

Practical mathematics underpinned not only the vast construction works of Ancient Egypt but also the bureaucracy that supported the whole civilisation for thousands of years.

Such everyday things were not always preserved, but the scribe Ahmose had this mathematical papyrus buried with him as a sign of his elite status and education.

It is very rare for a scribe to sign and date a papyrus at this period, as he did. Ahmose proudly claims that he copied these maths problems out ‘according to the writings of old made in the time of the Dual King Nimaatre’, some 250 years earlier. Such claims were often made (or invented) to stress how authoritative a text was, but I hope it is true here - it looks back to a golden age that Ahmose would have known from the old classic poems that he had to copy out as a student, and that was very different from his own war-torn world of 1530 BC.

What fascinates me about this papyrus is that we can still see the moments when Ahmose re-dipped his pen - especially when he was drawing ruled lines to keep his layout of the problems neat and straight. And here, we can see that his mind wandered; and here, he left part of the papyrus blank.

When you see the papyrus in front of you, you can realise the texture and reality of ancient lives. Details like these give us a sense of a real individual who was trying to be neat rather than a standard ‘ancient Egyptian’.

Such material artefacts are a common ground where the ancient and modern viewers can almost meet – as you look at these signs, it seems as if the hand that wrote them on the papyrus has just left them and moved on a few moments before.