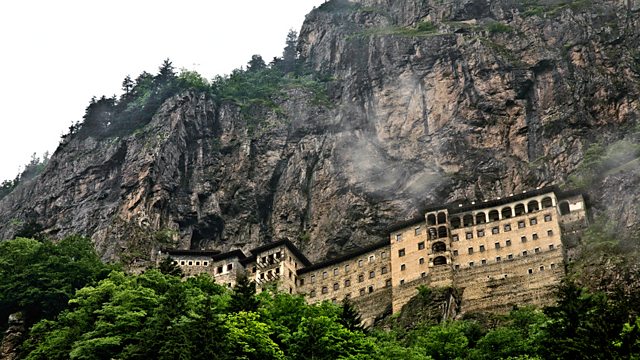 Tom de Waal visits the Soumela Monastery near Trabzon in Turkey, where Pontic Greeks from all over the world gather every year to celebrate the feast of the Virgin.

The Black Sea Region of Turkey was once the ancient kingdom of The Pontus and its Christian orthodox inhabitants subsequently survived and thrived throughout Byzantine and Ottoman times. But for centuries this culture, centred on the great trading port of Trebizond on the caravan route to Persia, was living on borrowed time. The 1923 exchange of populations between modern Greece and Turkey, resulting from the Lausanne Treaty, gave rise to the Pontic nationality splitting amongst multiple citizenships. The shepherds in the high mountains behind the city of Trebizond who for more than a thousand years had driven their flocks up onto the high plateau in summer and back to the narrow coastal plain in winter, sometimes adopting a Christian persona, sometimes a Muslim one, disappeared and the economy has never really recovered. The architectural jewel that was Trabzon has become tower blocks. The final insult came five years ago with the much opposed construction of a coastal motorway which has chopped this once great maritime city off from the Black Sea. The isolation that kept ancient cultures protected has gone.

Tom de Waal traces some of what has been lost to the Soumela Monastery where every August 15th people of Pontic descent from across the globe come to remember the feast of the Virgin. Here there is a collision of Russian Turkish and Greek interests which provides a lesson in modern regional politics. But connecting all of these disparate people is music: the Greek Lyre and the Turkish Kemence. They play the same, they dance the same. Culturally connected and politically divided this is a story of people who are really cousins, or even brothers, but cannot quite bring themselves to admit it.

Seven and a Half Years