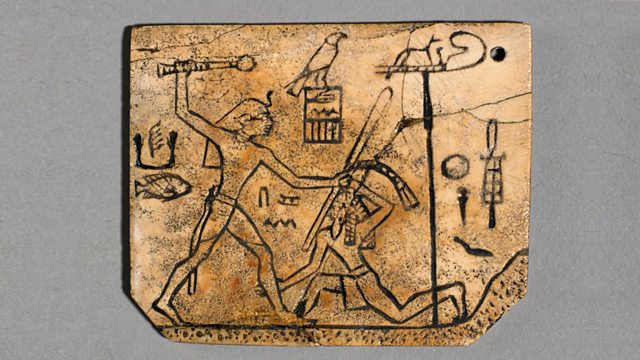 Neil MacGregor revisits the early days of a great civilisation to study one of the earliest Egyptian kings through the sandal label that accompanied him to the afterlife.

This week, Director of the British Museum Neil MacGregor investigates the impact on human society of large numbers of people coming together in the world's first cities between 5000 and 2000 BC. As they did so, they developed new trade links, the first handwriting, and new forms of leadership and beliefs.

All of these innovations are present in today's object; a small label made of hippo ivory that was attached to the sandal that one of the earliest known kings of Egypt, King Den, took his grave. The label not only depicts the king in battle against unknown foes but also boasts the first writing in this history of the world - hieroglyphs that describe the king and his military conquests.

The figure holding a mace on this hippopotamus ivory label is King Den. He was a member of the first dynasty of rulers that united Egypt into a single state. This label was attached to one of Den's sandals and placed in his tomb when he died. In front of Den a much smaller enemy cowers. Hieroglyphs on the label celebrate, 'the first occasion of smiting the east'. They refer to King Den's military conquests in Sinai, eastern Egypt.

Why did civilisation develop in Egypt?

The world's first states and cities developed in river valleys. Along the Nile in Egypt the annual flooding created a fertile valley and delta ideal for growing crops. Egypt's individual towns were unified and governed by a single king, described in later times by the title 'pharaoh'. The pharaoh, however, was more than just a leader; he was also a representative of the gods and the focus for the state's religion. Egypt would be ruled by pharaohs for the next 3000 years.

Who was King Den?

Den was the fourth ruler of the first dynasty of Egypt and the first to adopt the title ‘King of Upper and Lower Egypt’. This later became the title used for all Egyptian kings.

When he came to power, the dynasty was well established throughout the country and Egyptian authority was being extended by military expeditions to the south and east, into Nubia and the Sinai.

Most of our knowledge about Den comes from his tomb at Abydos and the tombs of his high officials at Saqqara. The limited inscribed material available adds some interesting details, such as the fact that Den celebrated a jubilee festival and took part in religious ceremonies.

Although the dynastic family came originally from southern Egypt, the court ruled from the city of Memphis in the north. Den chose to make his own tomb in the south, returning to the region of his origin.

This tomb and its contents have provided most of the information we possess about the material culture of his reign. The tomb was a large brick-built monument with a burial chamber sunk into the desert gravel, floored with granite slabs but lined and roofed entirely with wood.

In front of the tomb stood a pair of monumental tombstones inscribed with the name of Den. The idea of a stairway into the burial-chamber was invented during Den’s reign and used in his tomb as well as those of others. This enabled the roof of the tomb to be finished before the funeral.

The wealth of Egypt at this time is reflected in the array of goods placed in the tomb as offerings for the dead king. Even after repeated raids by tomb-robbers, the remains of the tomb equipment included pieces of fine furniture inlaid with ivory, tools, weapons, metal, stone and pottery vessels, jewellery and even games.

In addition to these gifts, the king was also accompanied into the afterlife by members of his personal household staff, over 130 individuals, who were buried in rows of graves around his tomb. Each of these graves originally had its own small tomb-marker of limestone, inscribed with the name of the occupant.

Higher ranking officials were buried in their own tomb. The names of certain high officials who served under Den have been preserved on clay seal-impressions. The most important were named Hemaka and Ankhka, and their tombs on the desert at Saqqara were almost as lavishly equipped as that of Den himself.