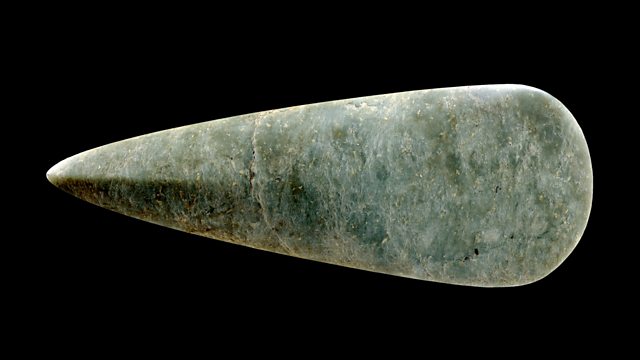 A History of the World arrives in Britain for the first time - with a 6,000-year-old jade axe discovered near Canterbury but made in the High Alps. What was Britain like then?

This week's programmes in the history of the world look at the growing sophistication of modern humans around the globe between 5000 and 2000 BC. Mesopotamia had built the royal city of Ur, the Indus valley boasted the city of Harappa, and the great early civilisation of Egypt was beginning to spread along the Nile.

In Britain life was much simpler, although trade links with Europe were well established. In today's programme, Neil Macgregor tells the story of a beautiful piece of jade, shaped into an axe head. It is about 6000 years old and was discovered near Canterbury in Kent but was made in the high Alps. Neil MacGregor tells the story of how this object may have been used and traded and how its source was cunningly traced to the heart of Europe

This jade axe is highly polished and would have taken hours to make. However, it is unmarked and was not used to cut wood. It was probably a luxury status symbol, indicating its owner's power and prestige. Jade is not found in Britain and this axe was made from a boulder high in the Italian Alps. It was possibly traded through Brittany in France and then arrived in England as an object of ceremony or ritual.

How were axes used for farming?

The polished stone axe was a revolutionary tool that transformed society and the landscape after the Ice Age. At the time Northern Europe was covered in thick forest. Stone axes set in wooden handles allowed people to clear space to plant crops and graze domestic animals. The earliest known British farmers came from other parts of Europe, crossing the sea with their animals and seed in small boats. These people later constructed stone monuments at Avebury and the first Stonehenge.

More than just a cutting edge

By Mark Edmonds, Professor of archaeology, University of York

Almost anybody presented with one of these things would just stop in their tracks!

They are stunning and they are not only visually very striking but if you have the good fortune to actually handle one of these axes the feel in the hand, the balance, the weight, the smoothness – they have been polished to an extraordinary degree.

We are talking about hour upon hour of grinding against stone and then polishing with fine sand or silt and water and then rubbing backwards and forwards in the hand, perhaps with grease and leaves, to really get that polish - that’s days of work. It gives the edge a really sharp and resilient bite to it but the polishing also brings out the shape, allows the control of form, and brings out that extraordinary green and black speckled quality to the stone – it makes it instantly recognisable, visually very striking, and maybe those things are equally as important as the cutting edge.

It’s also in some respects so delicate that you really would not want to hit anything harder than a soft cheese in case it broke! That may suggest that beyond the practical tasks that you can use one of these things for, axes had a further significance, a significance that came from where they were found, who you got them from, where and when they were made, the sort of stories that were attached to them.

Sometimes they were tools to be used, and carried and forgotten about, but at other times they would come into focus as important symbols to be held aloft, to be used as reminders in stories about the broader world, and sometimes to be handed on – in an exchange with a neighbour, with an ally, with someone you had fallen out with, and perhaps in exceptional circumstances, on someone’s death, the axe was something that had to be dealt with. It had to be broken up like the body or buried like the body, and we do have hundreds if not thousands of axes in Britain that appear to have been given that kind of treatment – buried in graves, deposited in ritual ceremonial enclosures and even thrown into rivers.

What was it for?

The axe has been a powerful symbol for thousands of years in many parts of the world. It means different things to different societies.

To the early farmers the everyday working axe was an essential tool for clearing land for cultivation. Objects like the Canterbury jade axe, however, were not used for farming, they were symbols of status.

Ownership of one was undoubtedly restricted. The green colour of jade might itself have been significant, as copies were made using local greenish rock.

More than a hundred axeheads made from jade have been found in Britain and Ireland. Most of them have been accidental and isolated, so there is no sense of a pattern.

The rock they were made from was quarried miles away in the Italian Alps, and many years before the axes reached these shores.

It is possible that they arrived here from France. Finds of jade axes are strewn across Europe. In Brittany (France) they were buried in numbers with the dead. These axes were shaped and polished to a mirror finish, and were probably commissioned by men of power and status.

Their meaning to communities in Britain remains a mystery but they may have been regarded as sacred objects containing memories and myths.