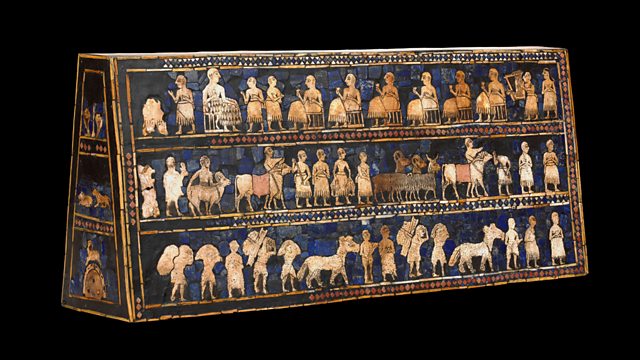 Neil MacGregor describes the discovery of mosaics from the ancient Mesopotamian city of Ur, now in Southern Iraq. The Standard of Ur shows intricate scenes of battle and regal life.

Neil MacGregor with this week's examination of the first great civilisations with one of the most spectacular discoveries of ancient royal goods. The magnificent gold and silver jewellery was found nearly 100 years ago at a royal burial site in the City of Ur in Southern Iraq, at the heart of one of the first great civilisations in the world. It leads Neil MacGregor to contemplate the nature of kingship and power in Mesopotamia. The Standard of Ur is a set of mosaic scenes that show powerful images of battle and regal life and that remain remarkably well preserved given its fourand a half thousand year old history.

Contributors include sociologist Anthony Giddens, on the growing sophistication of societies at this time, and the archaeologist Lamia Al-Gailani who considers what Ancient Mesopotamia means to the people of modern day Iraq.

What the Standard of Ur was used for remains a mystery but it seems to have royal connections. It was buried in a royal grave and depicts two contrasting scenes of a king of Ur - identifiable as larger than the other figures. On one side captured enemy prisoners are presented to the king by his soldiers. On the other side the king enjoys a ceremonial banquet accompanied by lyre music.

Where did the first cities develop?

Ur in Mesopotamia was one of the earliest cities in the world. The Greek word Mesopotamia means the land between the rivers and Ur was one of many cities that developed in the fertile plains between the Tigris and the Euphrates. Unlike Egypt at this time, these cities were not unified into a single state but were individual self-governing centres of power. They were ruled by kings and contained palaces, temples and sophisticated irrigation systems.

By JD Hill, Lead curator, A History of the World, British Museum

We live in a world of cities. In 2010 for the first time in history more of the world’s population lives in cities than in the countryside. A tipping point passed in Britain over a hundred years ago.

This long time period, 200 generations, does suggest that there was nothing direct that links the origins of farming to the emergence of towns and cities 5,000 years ago in southern Iraq, Egypt, Pakistan and north west India.

When thinking about how cities emerged it might be assumed that the average size of a settlement slowly grew so that small hamlets turned into villages, which in turn grew into large towns or cities. However, archaeological evidence shows this was not the case. Across the world villages of farmers rarely grew to be larger than housing more than 1,000 or 2,000 men, women and children. So the appearance of towns and cities in the fourth and third millenniums BC with 10,000 to 40,000 people was a big jump in size – and there are few settlements in the archaeological record that fall between the two.

What lay behind this is one of the biggest questions in archaeology. To answer it helps to answer an even bigger question in world history and archaeology – why did states and cities emerge for the first time when they did and where they did?

It would seem the answer lies in how people worked out how they could live together. It appears that about 2,000 people is a natural upper limit to the size any group of people can live together without needing layers of administration, formal political institutions or marked differences in wealth and power. The jump in settlement size to create towns and cities of up to 40,000 people implies a major change in how people solved the day to day problems of organising people, resolving disputes between neighbours and allowing people who were actually strangers to each other to live together in the same settlement.

Whether large settlements were created first, or new ways of organising people to live together came first, is not clear. But this was a major change in how people lived their lives – you might even describe it as the origins of politics. It is a change that shaped the rest of world history and we are still working through its ramifications.