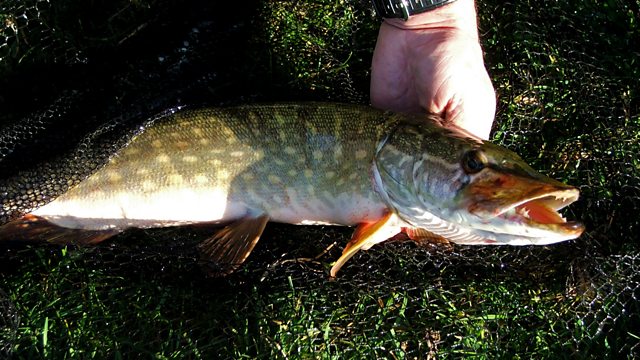 Mike Ladle joins Lionel Kelleway on the banks of the River Frome in Dorset to catch the river's most successful predator, the pike.

The pike has a fearsome reputation as Britain's most successful freshwater river predator. Keen fisherman and retired freshwater biologist Mike Ladle will never forget the first time he landed a pike. He was trying to catch eels, and hauled up a pike instead. When he tried to release the hook from inside its mouth, he soon found out why fishermen treat pike with such respect: their mouths are lined with rows of backwardly pointing teeth. They even have teeth on their tongue, a tongue which is green in colour! So once a pike has trapped its prey in its mouth there is no escape from those rows of thorn-like teeth.

Lionel Kelleway joins Mike Ladle on the banks of the River Frome in Dorset for a spot of fishing, using a curved hook and a dace as bait to lure their pike. While the two men watch the cork on the line bobbing in the water, Mike reveals some of the traits which make the pike so successful and why these fish are not choosy about the species of prey but the shape of the prey. Pike are also cannibalistic and will eat their own relatives, and even their own young.

Pike have been described as jet-propelled mouths. They are cylindrical in shape and all the large fins are at the rear end of the fish, which gives them the thrust they need to spring forwards in the water after prey. They hide under cover at the edge of the bank and then curl their tail round which then acts like a spring to thrust them forwards at their prey.

Years of catching, tagging, releasing and studying pike has given Mike a fascinating knowledge of these formidable creatures, but even so, there still remain some mysteries about the pike as Lionel discovers when he meets a self-confessed 'pikeoholic', gets to peer inside the mouth of a predator and learns about a fish called Isaac.