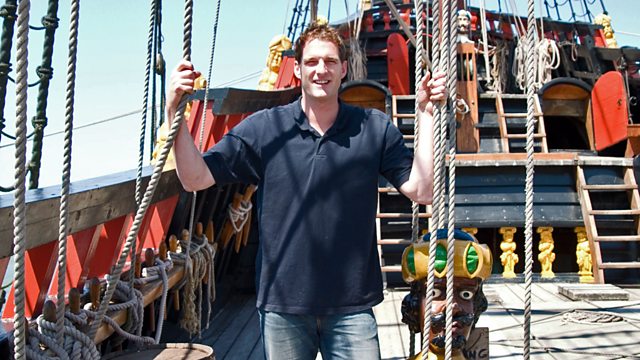 Empire of the Seas: How the Navy Forged the Modern World Series 1
Episode 1 of 4

Dan Snow charts the role the Royal Navy played in Britain's development. How victory over the Armada transformed impoverished England into a powerful seafaring nation.

Historian Dan Snow charts the defining role the Royal Navy played in Britain's struggle for modernity - a grand tale of the twists and turns which thrust the people of the British Isles into an indelible relationship with the sea and ships.

Heart of Oak opens with a dramatic retelling of 16th- and 17th-century history. Victory over the Armada proved a turning point in the nation's story as tiny, impoverished England was transformed into a seafaring nation, one whose future wealth and power lay on the oceans. The ruthless exploits of Elizabethan seafaring heroes like Francis Drake created a potent new sense of national identity that combined patriotism and Protestantism with private profiteering.

At sea and on land, Snow shows how the navy became an indispensable tool of state, weaving the stories of characters like Drake, God's republican warrior at sea Robert Blake, and Samuel Pepys, administrator par excellence, who laid the foundations for Britain's modern civil service.

With access to the modern navy and reconstructed ships of the time, Snow recounts the navy's metamorphosis from a rabble of West Country freebooters to possibly the most complex industrial enterprise on earth.