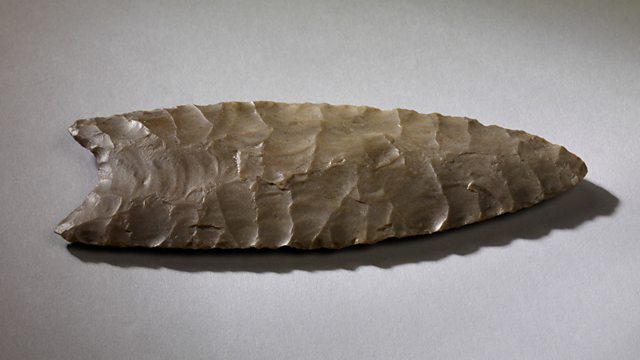 Neil MacGregor, continues his series retelling humanity's history through the objects it has made. Today, the story of early human settlement moves to North America.

The Director of the British Museum, Neil MacGregor, retells the history of human development from the first stone axe to the credit card using 100 selected objects from the Museum. In this programme, Neil describes an object that dates from the earliest settlement of North America, around 13,000 years ago. It's a deadly hunting weapon, used by the first inhabitants of the Americas.

This sharp spearhead lets us understand how humans spread across the globe. By 11,000 BC humans had moved from north east Asia into the uninhabited wilderness of north America; within 2000 years they had populated the whole continent. How did these hunters live? And how does their Asian origin sit with the creation stories of modern day Native Americans?

Neil MacGregor tells the story of the Clovis Point, with contributions from Michael Palin and American archaeologist Gary Haynes

The first clear evidence of human activity in North America are spear heads like this. They are called Clovis points. These spear tips were used to hunt large game. The period of the Clovis people coincides with the extinction of mammoths, giant sloth, camels and giant bison in North America. The extinction of these animals was caused by a combination of human hunting and climate change.

How did humans reach America?

North America was one of the last continents in the world to be settled by humans after about 15,000 BC. During the last Ice Age, water, which previously flowed off the land into the sea, was frozen up in vast ice sheets and glaciers so sea levels dropped. This exposed a land bridge that enabled humans to migrate through Siberia to Alaska. These early Americans were highly adaptable and Clovis points have been found throughout North America.

Young, restless and switched on

I suppose everybody that ever finds a Clovis Point is deeply moved by the act of discovering something that’s 13,000 years-old. You can almost detect a ghost that had made it.

The people who made these points were new to the Americas, they were people on the move – explorers – and I can really feel quite a bit of empathy with what it must have been like to enter a country that nobody had told you about – that no-one had actually been in before you, and to try to figure out where you want to go next, how you stay in touch with your relatives and friends. These things are markers of their identity, as much as being very functional. They’re very sharp, they’re very well made, they’re extremely well engineered – maybe over-engineered – they’re made better than they probably had to be.

I worked as a graduate student back in the 1970s in Virginia at a site called the Thunderbird site on the banks of the Shenandoah River, and that was a place where people were making these Clovis points or Clovis type points, and sometimes they’d fail, they’d break one – they’d drop it or discard it. Sometimes there’d be piles and piles of flakes from when they were reducing a rock into these nice sharp spear points.

Being there at the time of discovery and finding these little bits and pieces that could be put back together to sort of ‘discover’ the process people had gone through in making them inspired me to learn how to make them myself, which I tried to do, and it takes a while. It isn’t something that comes as easy as you might hope it would and every time I find one now I still sort of relive that thrill; the idea that this is something wonderful – this is something from the past and it isn’t easy to make, and very few people probably could do it.

I have an image, it’s a very romanticized, I suppose, image. It’s impossible for me not to think of these people as all very young. I mean that’s just the way it seems to be with Stone Age people that they don’t live very long lives, and it has even been suggested that many of these Clovis points were made by teenagers – young men or women on the move, old enough to reproduce, old enough to explore and very switched on as hunter-gatherers.