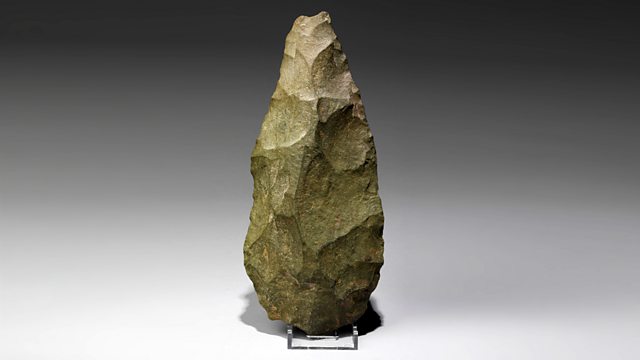 Director of the British Museum, Neil MacGregor, retells humanity's history through the objects it has made. Today he reveals the Swiss Army knife of the Stone Age, the hand axe.

The Director of the British Museum, Neil MacGregor, retells two million years of history of human development through the objects it has produced. This programme follows early humans as they slowly begin to move beyond their African homeland taking with them one essential item - a handaxe.

In the presence of the most widely used tool humans have created, Neil sees just how vital to our evolution this sharp, ingenious implement was and how it allowed the spread of humans across the globe.

Today Neil MacGregor tells the story of the handaxe, with contributions from designer Sir James Dyson and archaeologist Nick Ashton

This handaxe made of green volcanic lava represents a tradition of tool-making which began about 1.6 million years ago. Smaller handaxes became common handheld tools used for cutting meat or woodworking. Produced with great skill by ancestors we would recognize as becoming human, this object shows that manufactured things, sometimes of distinctive quality, were starting to be important in the evolution of our behaviour.

Humans spread out of Africa

The makers of handaxes are the first humans to spread across Africa into Central Asia, the Middle East, Europe and Asia. Handaxes reflect the first great spread of humankind and the establishment of a way of life in which we recognize the beginnings of our human characteristics. No other humanly made object has ever been manufactured over such a long period and before the 20th century no other object has spread over such a wide geographical area.

Function, design and style in one

This artefact is one of the oldest objects in the British Museum that combines, in my view, function, design and style in one piece.

The handaxe was found in 1931 by Louis Leakey in the Olduvai Gorge in Tanzania, and is dated to about 1.2 million years ago. It was crafted from a block of hard, green lava called phonolite by striking the edges with a round pebble. Flakes were removed from across two faces to create a carefully shaped symmetrical tool with sharp, all-round cutting edges.

Rocks like phonolite are difficult to work, and to me highlight the remarkable skills of their makers.

These hand-held tools would have been efficient for the range of tasks involved in animal butchery from slicing hide and filleting meat to disjointing carcasses. The efficiency of handaxes is reflected in their widespread use across Africa, and from a million years ago in Asia and Europe.

Handaxes were first being made in Britain some 600,000 years ago and were still being used by Neanderthals only 40,000 years ago. One mystery is how these traditions of manufacture were passed on from one generation to the next over such huge distances and vast lengths of time? Perhaps this is simply an efficient tool that was reinvented time and again.

Handaxes, however, seem to have been more than simple functional tools. Their symmetry in two, or sometimes three, planes shows a design beyond the utilitarian.

Some researchers have argued that they were status symbols, perhaps to attract mating partners or indicate power, while others have suggested that specific shapes were used to indicate group identity.

For me, these remarkable tools reveal not only the skilled craftsman, but also the appreciation of aesthetics in our earliest ancestors, and are a reflection of the thinking minds of the individuals who made them.