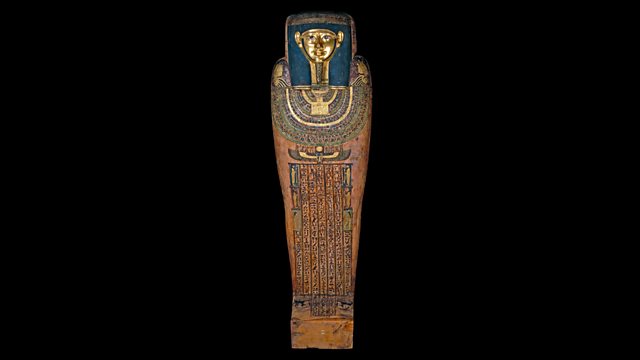 Director of the British Museum, Neil MacGregor, starts a new series retelling humanity's history through the objects it's made. The first is an Egyptian mummy

The Director of the British Museum, Neil MacGregor, retells the history of human development from the first stone axe to the credit card using 100 selected objects from the Museum. His history will cover two million years and include items that were made in every part of the globe. But his journey begins when, at the age of eight, he visited the British Museum for the first time and came face-to-face with an object that fascinated and intrigued him ever since - an Egyptian mummy.

Hornedjitef was a priest who died around 2250 years ago, and he designed a coffin that, he believed, would help him navigate his way to the afterlife. Little did he know that this afterlife would be as a museum exhibit in London. This ornate coffin holds secrets to the understanding of his religion, society and Egypt's connections to the rest of the world.

This is the mummy of Hornedjitef an Egyptian priest who was buried in a coffin, within a second, outer coffin. Examining his body using CAT scans and X-rays revealed that he suffered from arthritis and osteoporosis suggesting he was a mature man when he died. The embalmers have placed four packages inside his torso, probably his lungs, liver, stomach and intestines. He lived over a thousand years after Tutankhamun and Ramesses the Great at a time when Egypt was ruled by Greek kings.

Why did the Egyptians mummify their dead?

When ancient Egyptians like Hornedjitef died they believed they were setting off on a journey from this world to the afterlife. The process of mummification, spells and elaborate coffins enabled them to travel to the next world. This coffin is decorated with images of gods and extracts from the Egyptian Book of the Dead. A figure of the sky goddess Nut is painted on the interior of this coffin. This symbolically locates Hornedjitef in the womb of the goddess, ready to experience rebirth.

Learning from the people of the past

The bodies of people from the remote past rarely survive as anything other than nameless bones. The ancient Egyptian priest Hornedjitef is an exception.

Because of their custom of preserving the dead body through mummification and recording the name in writing, many ancient Egyptians are among us today in museums, with skin, hair, fingernails and identities all intact. We can even see the faces of the great kings who ‘made history’, noticing that behind their heroic portrayals in sculpture there were real people with familiar human strengths and weaknesses.

Looking at a mummy is a powerful and emotive experience, one which can transport us back instantly through thousands of years, making us feel close to them. Yet at the same time we are aware of how different their lives must have been from our own.

Beyond these startling encounters, Egyptian mummies have much to teach us. Sealed within their wrappings and painted coffins, they are a storehouse of information, most of which was never recorded in writing. Modern scientific techniques allow us to look beneath the wrappings and to gather this evidence about life and death – how long people lived, what they looked like, what illnesses they suffered from, how they died, how they were mummified.

In this way we can picture Hornedjitef as a man of mature years, enjoying a privileged life as a ‘servant of the god’, yet suffering from the discomforts of arthritis like any modern man. The writings on his coffins also tell us when he lived and reveal the religious beliefs and knowledge of the world which learned men had at that time, including lists of stars which reflect the birth of the science of astronomy.

The learning process does not stop. When Hornedjitef’s tomb was discovered in the 1820s the hieroglyphic script had just been deciphered. Much of what is written on his coffins was still a mystery then, but now we can read it all. And after we are gone, he will still remain, unchanged, revealing more about his world as science finds better ways to gather the answers to its questions.

How exciting it would be to know what our successors might learn from him a hundred years from now.

See more objects on this theme

Objects from museums related to the theme of death.

More from Radio 4: In Our Time - Akhenaten

Discussing the Pharaoh Akhenaten, the ruler who brought revolutionary change to ancient Egypt.

A human eyeball in a silver setting gives a striking insight into the theatre of cruelty.