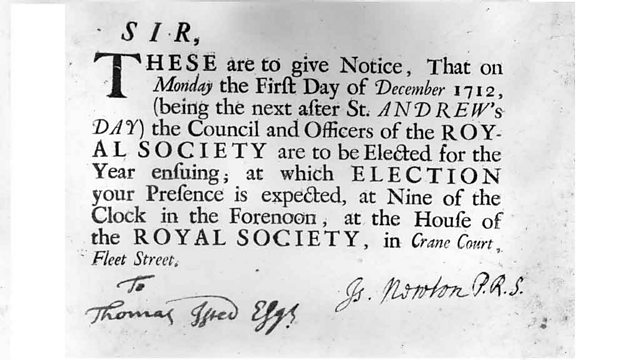 In Our Time In Our Time: The Royal Society and British Science

Melvyn Bragg travels to Wadham College, Oxford, where the young Christopher Wren and friends experimented in the garden of their inspirational college warden, John Wilkins.

As part of the BBC's year of science programming, Melvyn Bragg looks at the history of the oldest scientific learned society of them all: the Royal Society. Melvyn travels to Wadham College, Oxford, where under the shadow of the English Civil War, the young Christopher Wren and friends experimented in the garden of their inspirational college warden, John Wilkins. Back in London, as Charles II is brought to the throne from exile, the new Society is formally founded one night in Gresham College. When London burns six years later, it is two of the key early Fellows of the Society who are charged with its rebuilding. And, as Melvyn finds out, in the secret observatory in The Monument to the fire, it is science which flavours their plans.