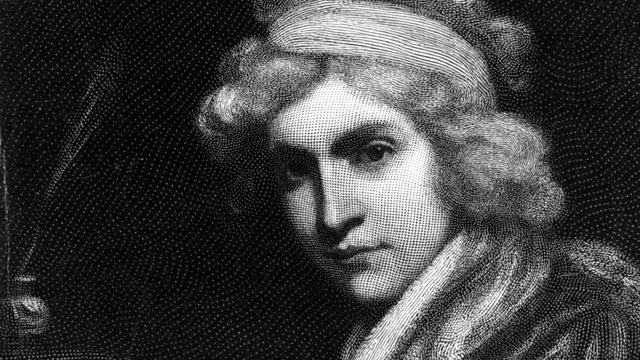 Melvyn Bragg and guests John Mullan, Karen O'Brien and Barbara Taylor discuss the life and ideas of the pioneering British Enlightenment thinker Mary Wollstonecraft.Mary Wollstonecraft was born in 1759 into a middle-class family whose status steadily sank as her inept, brutal, drunken father frittered away the family fortune. She did what she could to protect her mother from his aggression; meanwhile, her brother was slated to inherit much of the remaining fortune, while she was to receive nothing.From this unpromising but radicalising start, Wollstonecraft's career took a dizzying trajectory through a bleak period as a governess to becoming a writer, launching a polemical broadside against the political star of the day, witnessing the bloodshed of the French Revolution up close, rescuing her lover's stolen ship in Scandanavia, then marrying one of the leading philosophers of the day, William Godwin, and with him having a daughter who - though she never lived to see her grow up - would go on to write Frankenstein.But most importantly, in 1792, she published her great work, A Vindication of the Rights of Woman, which marks her out as one of the great thinkers of the British Enlightenment, with a much stronger, more lasting influence than Godwin. The Vindication was an attempt to apply the Enlightenment logic of rights and reason to the lives of women. Yet it was not a manifesto for the extension of the vote or the reform of divorce law, but a work of political philosophy. And surprisingly, as recent scholarship has highlighted, it was infused with Rational Dissenting Christianity, which Wollstonecraft had absorbed during her time as a struggling teacher and writer in north London.John Mullan is Professor of English at University College, London; Karen O'Brien is Professor of English at the University of Warwick; Barbara Taylor is Professor of Modern History in the School of Humanities and Social Sciences at the University of East London.