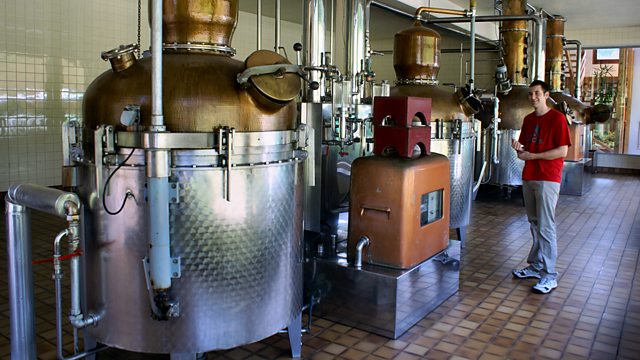 Sheila Dillon tastes her way through the long tradition of turning fruit into alcohol. She hears from eau de vie producers in France and cider brandy distillers in Somerset.

Sheila Dillon tastes her way through the long tradition of turning fruit into alcohol. She hears from eau de vie producers in the Alsace region of France and from cider brandy distillers in Somerset.

The technique of distillation was first devised by Arabs and then embraced by Europeans more 700 years ago. It has given us whiskies, cognacs, Armagnac, and countless other drinks but behind them all lies eau de vie, 'the water of life', the clear spirit that emerges from the tool of the distillers' trade, the still.

The most prized eau de vies are those produced from nothing but fermented fruits such as pears, raspberries, quinces or bilberries. Few drinks are so dependent on landscape, tradition and craft. Often, local wild fruits are gathered, fermented and then heated in a family-owned still.

Sheila Dillon looks at this centuries-old practice of producing eau de vies. It is a tradition now in sharp decline across Europe, but Sheila discovers a brave, lone effort underway in Somerset to revive a British form of this drink.

To help tell the story Sheila is joined by food historian Ivan Day and drinks buyer Sarah Knowles. Reporter Ray Kershaw travels to the valleys of the Vosges mountains of Alsace, on the French border with Germany, to visit one of the surviving family distilleries, and Sheila hears from C Anne Wilson, author of Water of Life: A History of Wine Distilling and Spirits.