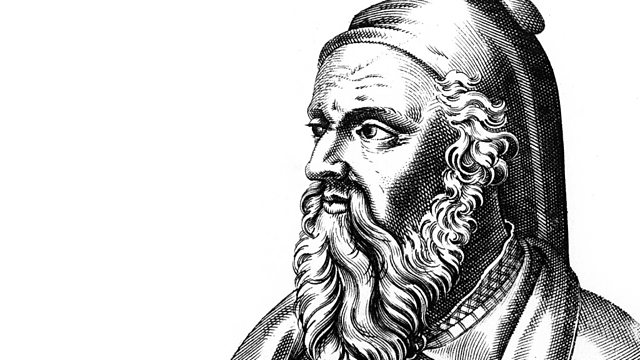 Melvyn Bragg and guests discuss the ideas and influence of the Greek mathematician Pythagoras and his followers, the Pythagoreans.

Melvyn Bragg and guests Serafina Cuomo, John O'Connor and Ian Stewart discuss the ideas and influence of the Greek mathematician Pythagoras and his followers, the Pythagoreans.The Ancient Greek mathematician Pythagoras is probably best known for the theorem concerning right-angled triangles that bears his name. However, it is not certain that he actually developed this idea; indeed, some scholars have questioned not only his true intellectual achievements, but whether he ever existed. We do know that a group of people who said they were followers of his - the Pythagoreans - emerged around the fifth century BC. Melvyn Bragg and his guests discuss what we do and don't know about this legendary figure and his followers, and explore the ideas associated with them. Some Pythagoreans, such as Philolaus and Archytas, were major mathematical figures in their own right. The central Pythagorean idea was that number had the capacity to explain the truths of the world. This was as much a mystical belief as a mathematical one, encompassing numerological notions about the 'character' of specific numbers. Moreover, the Pythagoreans lived in accordance with a bizarre code which dictated everything from what they could eat to how they should wash. Nonetheless, Pythagorean ideas, centred on their theory of number, have had a profound impact on Western science and philosophy, from Plato through astronomers like Copernicus to the present day.Serafina Cuomo is Reader in Roman History at Birkbeck College, University of London; John O'Connor is Senior Lecturer in Mathematics at the University of Saint Andrews; Ian Stewart is Emeritus Professor of Mathematics at the University of Warwick.