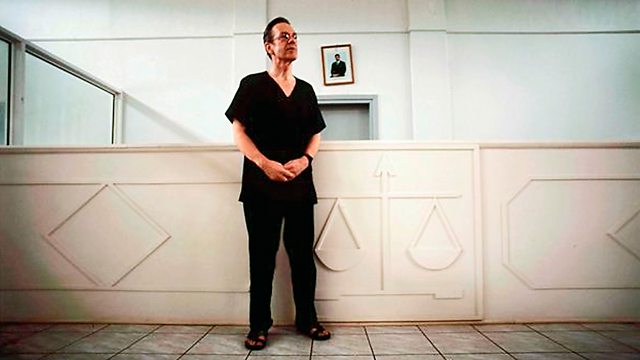 A penetrating look at mysterious goings on in Equatorial Guinea, a tiny West African nation newly rich from oil and infamous for corruption.

A failed coup attempt ... a British mercenary in a grim African prison ... a dictator accused by the West of torture ... and beneath it all, a spectacular underwater oil reserve that the world's major powers would love to get their hands on.

It may sound like the latest John LeCarre bestseller, but it's the real-life intrigue behind Simon Mann's African Coup, Storyville's penetrating look at mysterious goings on in Equatorial Guinea, a tiny West African nation newly rich from oil and infamous for corruption. Filmed over eighteen months, with access to key players, the film offers a unique look inside a country that rarely allows in the foreign press.

The story proper begins in 2004, when a group of mercenaries, headed by Mann, is arrested in Zimbabwe. Equatorial Guinea's president, Teodoro Obiang Nguema Mbasogo, accuses them of plotting a bloody coup d'etat to steal his country and its oil. When Mann is sentenced to 34 years in Equatorial Guinea's feared Black Beach jail, he claims to be only a part of a Western plot to grab the country's vast oil resources. This fast-paced thriller of a film travels the globe to unravel that plot, from South Africa to Spain, from London to Washington - promising to reveal the truth of what happened in the most controversial coup attempt in recent history.

But as this all plays out, another actor has its eye on Obiang's oil: China. The Chinese government showers the country with largesse. A new capital city rises from the jungle. Accused by the US of corruption and horrifying human rights abuses, President Obiang welcomes China as his new best friend. Simon Mann's African Coup sheds light on the uncomfortable realities of oil politics in the 21st century.

The Age of Stupid