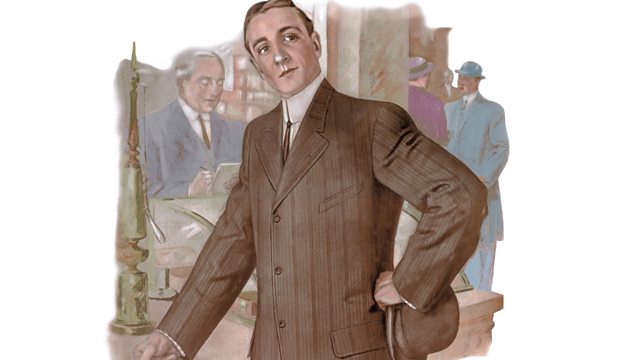 Ian Sansom reflects lightheartedly on dress, class, ageing and the philosophical life, prompted by a visit to a gentleman's outfitters to be measured for a new suit.

A funny and provocative look at dress, class, ageing and the philosophical life from Ian Sansom. An eccentric and perfectly tailored feature, prompted by a visit to a gentleman's outfitters, where Ian is measured for a new suit. He's reminded of the men in his family - his working-class grandfathers trussed up uncomfortably in clothes designed for the sedentary professional classes, collected in a family album of black and white photos that brings to mind John Berger's essay, 'The Suit and the Photograph' in which Berger writes about the great German photographer August Sander. This leads on to reflections on famous suit wearers in history and literature, and to a series of thoughts about, among others, Benjamin Franklin, John F. Kennedy, Michael Nyman, Franz Kafka, and Anthony Powell.

Ian Sansom is a critic and writer of both fiction and non-fiction, whose series of detective stories featuring a mobile librarian in rural Northern Ireland has gathered fans around the world. He has previously broadcast for Radio 3 on WH Auden, his passion for concrete, his adopted city of Belfast and bibliomania.