BBC One
Around the World in 80 Days
Main content 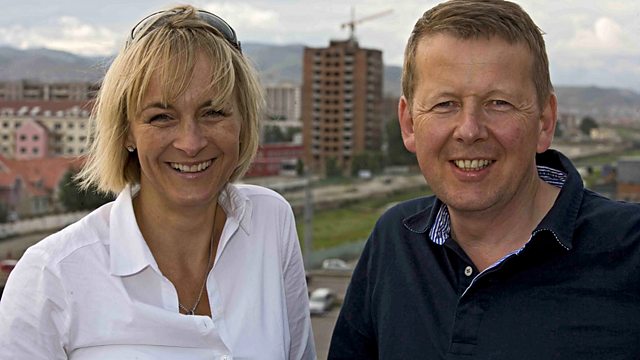 Around the World in 80 Days

BBC Breakfast presenters Bill Turnbull and Louise Minchin attempt to race across more than a quarter of the globe in the fourth and largest leg of the BBC Children in Need relay. Banned from entering China, the pair hope that they can make the 10,000 mile trip through Russia, South Korea and across the Pacific in time to reach America and the next team.

It is not all plain sailing. Before they can catch the last train of the day out of Ulan Bataar, Bill loses a tooth on the bone-rattling roads. They take the gamble of heading to the dentist on the way to the station.

On board the train, a tango dancer called Marina catches Bill's eye and she invites them to dance classes in Vladivostock. They catch a ferry from the gloomy Zarubino terminal, only to find that the shipping company has messed up their reservations - Bill has been boosted to first class, while Louise is sent to steerage.

Back on dry land, Louise and Bill explore South Korea while they wait for their container ship to America. At the border with North Korea, they pay their respects to the forgotten British soldiers who fought in the Korean War in the 1950s and in Seoul they visit a dog cafe with a difference.

They make a final dash across country on the KTX, one of the fastest trains in the world, to catch a cargo vessel for the 6,000 mile trip across the Pacific. Aboard, going a little stir crazy, Bill performs a desperate karaoke rendition of Born to Be Wild to a captive audience. By the time they reach Long Beach California, Bill and Louise are more than ready to handover to the next pair.

See all episodes from Around the World in 80 Days