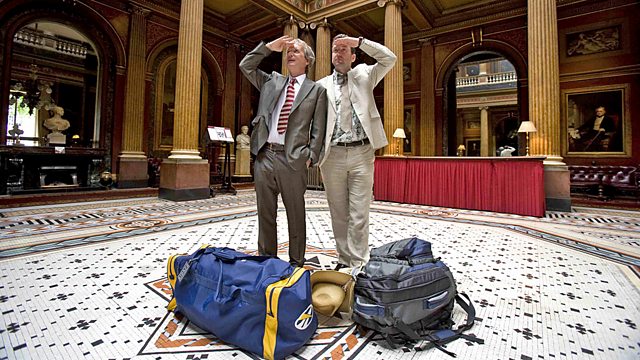 Around the World in 80 Days

As part of Children in Need, 12 celebrities form a global relay to circumnavigate the world in 80 days. Frank Skinner and Lee Mack travel from London to Turkey in eight days.

As part of Children in Need, 12 celebrities form a global relay to circumnavigate the world in 80 days without flying.

Comedians Frank Skinner and Lee Mack kick the whole Around the world in 80 days challenge off. They have just eight days to make it from the Reform Club in London to the Turkey/Iraq border where they hand over to team two, Apprentice stars Nick Hewer and Saira Kahn.

London to Turkey sounds easy on paper, what with 21st century travel to speed them on their way, or not. Frank and Lee can't even find their way out of the train station once they arrive in Paris and they have a connecting train to catch in just fifteen minutes.

Frank and Lee whistle through Europe spending their first night together on a train to Vienna with some hilarious anecdotes thrown in.

Ah Vienna. No stopping for the dynamic duo. They have a boat to catch to Budapest. But this is no ordinary boat, it's a turbo charged monster that hurtles them down the Danube. A brief wave at Bratislava and they fall out in a heap in Budapest. It's taken them 24 hours to travel nearly a thousand miles.

Their journey continues to Serbia on horseback, or it would if Frank could bear it but a night out on the plains is enough and the boys catch the train to Belgrade. On arrival they are whisked away in a bullet proof car, sent for them by royalty.

Their appetites satiated; a 16 hour, 1,000 mile journey by bus to Istanbul lies ahead. And it's here that the wheels finally start to come off. They arrive in Istanbul exhausted but not only that, they are now seriously doubting whether they can make the handover a full 1,000 miles and two days away.

In the incredible moonscape of Cappadocia, the boys arrive to hand over to the Apprentice stars, but where?

See all episodes from Around the World in 80 Days