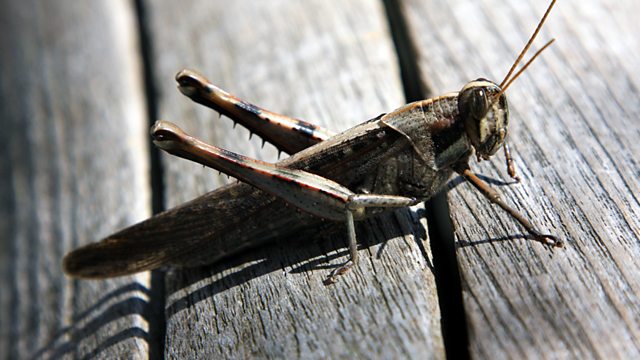 Tunnel-boring larvae, feet-stomping termites, head-banging beetles and a choir of tuneful songsters join Paul Evans in this unusual sound safari around an 'orchestra' of insects.

In an unusual sound safari, Paul Evans is our guide to the musicians of the insect world. There are head-banging beetles, tymbal-clicking cicadas, stridulating crickets, whining mosquitoes, pulsating moths, and toe-tapping plant hoppers. The world vibrates to the rhythms of insects. Their songs announce their presence, define their territory, lure potential mates and even shock predators.

In Japan, the songs of crickets have long been admired, and tiny caged insects are kept in the pocket or hung up in temples or houses where their songs are enjoyed as much as the dawn chorus of birds is appreciated in the west.

For some insects, sound is a weapon. For example, species of tiger moths produce pulses of sounds which they use to deter hunting bats. One explanation is that the moth's signals jams the bat's echolocation calls, in an aerial battle of sounds.

On the ground, another battle is being fought using sound as a secret weapon. Scientists at York University are developing hand-held recorders and sound recognition systems to detect wood-boring larvae in imported wood. With no sign of infestation on the outside, the larvae can be detected inside the wood by listening to the sounds they make as they tunnel and feed on the internal tissues.