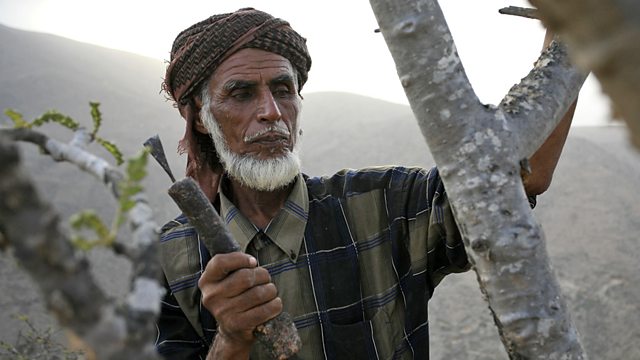 The Frankincense Trail
Episode 1 of 4

Kate Humble follows the ancient frankincense trade route across the Middle East. She travels over the hills of southern Oman, and crosses into Yemen.

Series in which intrepid presenter Kate Humble follows the ancient frankincense trade route of Arabia across the amazing modern world of the Middle East. Kate's journey along the 2,000-mile trail that first connected the Arab world with the West takes her on a quest that's steeped in history, searing with desert heat, and full of characters and adventure.

For 3,000 years before the birth of Christ, frankincense was more valuable than gold. Its sweet smelling aromatic smoke was treasured by Pharaohs and Caesars, and their insatiable demand for frankincense created a trade route from the southern coast of Oman to the Holy Lands. Vast camel caravans carried thousands of tons of frankincense over tribal lands constituting the modern-day Middle East. Following the trail, Kate finds modernity coexisting with ancient traditions as she discovers what it means to be a Western woman in Arabia.

Kate begins her epic journey following high in the hills of southern Oman. With her own supply of the precious resin, she walks with the Al Mahri tribe - the descendants of the ancient traders - and their 300 camels along the original trail through the scorching Empty Quarter desert. Crossing into Yemen, Kate arrives at the world's first skyscraper city, where her frankincense is used at the ritual blessing of a newborn baby. From the modern frankincense trade capital of Aden to an incredible camel-jumping contest, Kate journeys north and enters the mysterious Kingdom of Saudi Arabia.

See all episodes from The Frankincense Trail