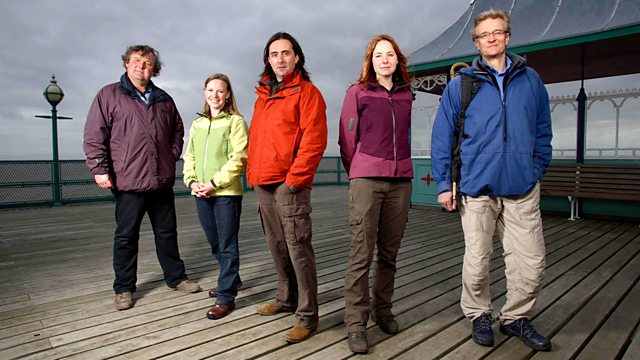 Whitstable to the Isle of Wight

A journey around the British Isles. Neil Oliver visits the Oyster Festival in Whitstable and Nick Crane explores the geology of the Isle of Wight.

Coast takes a journey around the British Isles and also visits the shores of their European neighbours.

Beginning at the famous Oyster Festival in Whitstable, Neil Oliver ventures offshore to the remarkable Red Sands sea forts. Built as air defences in the Second World War, they went on to inspire the design of the first North Sea oil rigs. Neil also becomes a silent movie director as he films a scene from The Mayor of Casterbridge using an antique camera, to reveal how pioneers in Brighton taught the world to make movies long before Hollywood shot a frame.

In Dover, Alice Roberts relives the glamour days of the hovercraft crossing to France. She takes to the waves to learn how to fly a hovercraft and discovers the science behind this British invention. She also finds out what brought the cross-channel service to its untimely end. Miranda Krestovnikoff joins a 1,000-year-old battle between men and fish in Hastings, and shares tricks of the fishermen's trade, including eco-friendly nets.

Mark Horton visits Rottingdean to peek over Rudyard Kipling's garden wall and follow in the footsteps of Victorian celebrity hunters, before unearthing the history of a unique Victorian electric railway which ran underwater: Magnus Volk's bizarre and beautiful Daddy Long-Legs.

Nick Crane explores the geology of the Isle of Wight, England's biggest island. It's a unique time capsule containing clues to an epic journey that the British Isles have made around the Earth. Nick discovers dinosaur footprints, ancient chalk seabeds, and evidence of a 'continental car crash' between Africa and Britain millions of years ago, when the two landmasses were on the move.