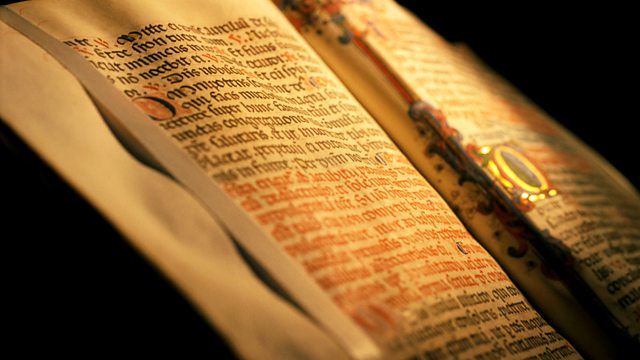 Radiophonic version of the text in the Book of Revelations in a communal reading - with music by Messiaen, Handel and Hildegard of Bingen.

At the back of the Bible hides perhaps the most misunderstood but profoundly influential little book of them all: the Apocalypse of St John, also known as the Book of Revelation. The Apocalypse - which means "unveiling" - is a breathless and intense sequence of visions given to the exiled John on the Aegean island of Patmos, 70 miles or so from Ephesus in what is now Turkey, at the end of the first century AD. Although it's well-known for being a challenging read, Revelation compensates right from the start with an explicit blessing on both reader and listener. Thereafter its twenty-two chapters are packed full of pictures and patterns that have inspired artists and composers (and scientists, kings, and politicians) down the nineteen centuries since it was written: seven seals and seven trumpets, a beast with seven heads and ten horns, a woman with a crown of twelve stars on her head, and a Hallelujah chorus! However, the book also ends with a curse on anyone tampering with its text, so this radiophonic collage presents the complete text from mysterious beginning to epic end - in a communal reading from a number of translations old and new (including echoes of New Testament Greek as well as Mandarin, Arabic, Persian, and Urdu). John Ashenfelter reads from the English Standard Version of the Holy Bible; additional voices include the Reverend Alan Walker, the Reverend Clifford Hill, Ekene Akalawu, Kathryn Knight (presenter), the former Bishop of Rochester Michael Nazir-Ali, and the Reverend Richard Coles. Decorating and illuminating the sacred text as it unfolds are iconic fragments from Handel's Messiah and every movement of Messiaen's Quartet for the End of Time, as well as choral music by Hildegard of Bingen and Antony Pitts, who also mixed this extended version.