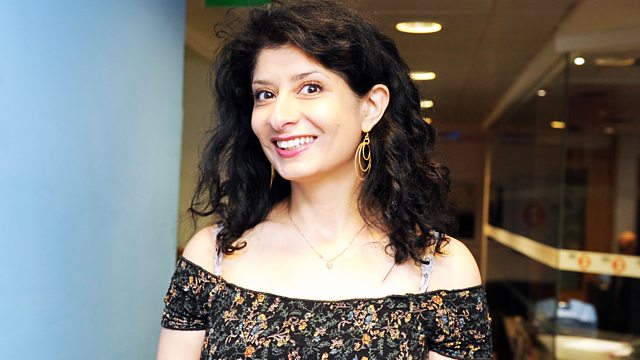 Shappi Khorsandi shares her experiences of growing up in her Iranian family. Plus a song from comedian Hils Barker. With Felix Dexter and Meera Syal. From July 2009.

Iranian comedian Shappi Khorsandi was brought to this country as a child and grew up in a very unusual and un British family.

Her father was one of Iran's top satirists and the family were forced to leave their home country as her father was termed a political dissident. As she grew up, it became apparent that the Khorsandi household was a little different from some of the families that Shappi had been friends with.

Shappi Talk takes this alternative background for Shappi to host a four part comedy series where she takes four elements of this upbringing to hilariously reveal what it was like growing up in a non-British family.

Joining Shappi will be comedian Felix Dexter who was born in St Kitts and moved to the UK as a child and each week Shappi also chats to another guest 'on location' and this time she's joined by Meera Syal.

There'll also be a song from comedian Hils Barker.

See all episodes from Shappi Talk