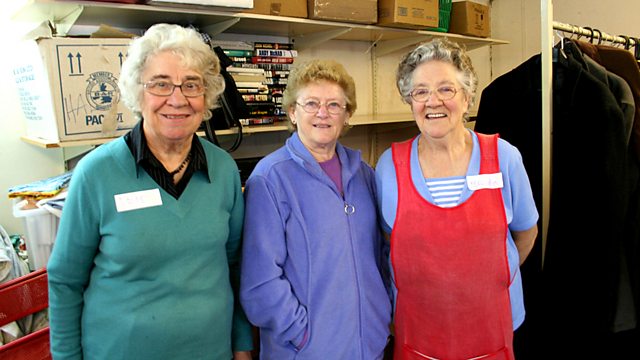 Mary Portas attempts to transform the humble charity shop into a serious high street contender. She begins with one of Save the Children's worst performing shops, in Orpington.

Mary Portas is a woman on a mission to transform the humble charity shop from the poor relation on the high street into a real contender. In the first month of her five-month mission, she takes on her own charity shop. What better way to understand the nitty-gritty of the charity shop sector than to roll up her sleeves, put on a pinny and get stuck in?

Her shop is one of Save the Children's worst performing shops, in Orpington, Kent. After introducing herself to the volunteer workforce - many of whom are pensioners with up to thirty years' service - Mary tries to teach them how to overhaul the sad and tired clothes and bric-a-brac dumped at the shop door.

Gobsmacked by the appalling quality of the donations, Mary and her army of volunteers descend on London's glossiest shopping centre armed with sacks of dirty knickers and moth-eaten jumpers to see what the great British public think.

With the help of her volunteers, Mary launches a local campaign to attempt to improve the quality of her dire donations, but her first attempt to appeal to the people of Orpington's charitable side fails, and Mary is left wondering if she has bitten off more than she can chew.

See all episodes from Mary Queen of Charity Shops