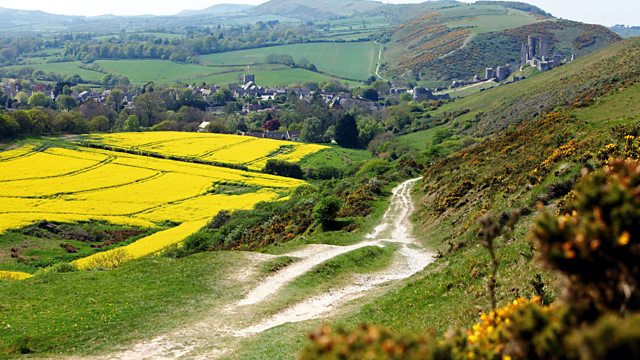 Clare Balding meets Garth Gunn and his son Craig on the Isle of Purbeck in Dorset. They embark on the training route that got Garth back on his feet as he recovered from ME.

Clare Balding explores walks that are good for the mind, body and soul.

Clare meets Garth Gunn and his son Craig on the Isle of Purbeck in Dorset, as they embark on the training route that got Garth back on his feet as he recovered from ME.

Garth had been a keen long distance walker since the late 1960s, trekking across the Isle of Wight east to west in a day. In the early 1990s, however, he suffered a series of traumas and was diagnosed with the energy-depleting condition ME, leaving him unable to even sweep the leaves up in his garden.

Walking played a huge role in his recovery. His son Craig, who is a postman, would finish work at lunchtime and walk Garth down to Poole harbour, a little bit further each day to try and build up his confidence. Garth would look across at the Purbeck Hills and think that he would never feel them under his feet again, but with a little help he did. He now regularly walks what he calls his 'training circuit', even conquering the 210 hillside steps of Jacob's Ladder to enjoy the stunning views across Dorset's Jurassic coast.

Clare joins father, son and friends as they all complete the seven-mile circuit.