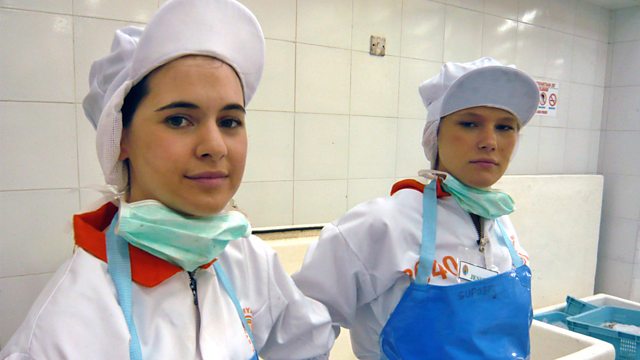 Blood, Sweat and Takeaways
Episode 1 of 4

Six young British food consumers go to live and work alongside the workers in Indonesia's tuna industry, enduring the heat in the canneries and life on a traditional tuna boat.

When it comes to food, we are spoilt for choice. From top class restaurants to low cost supermarkets, we take it for granted that we can buy whatever food we want, whenever we want it.

But would we feel the same if we knew the human cost of food production?

Six typical young British food consumers go to live and work alongside the millions of people in south east Asia's food production industries. They must catch, harvest and process food products that we eat every day, seeing behind the scenes of the tuna, prawns, rice and chicken industries for the very first time.

They eat, sleep and live with food workers in the poorest regions of Indonesia and Thailand, surviving on the same wages. The average wage for food workers here is around three pounds a day.

To begin with, the Brits tackle Indonesia's tuna industry in Bitung on the island of Sulawesi. In the UK, we consume over a billion tins of tuna a year and Bitung's canneries supply to many British supermarkets and sandwich chains.

The Brits live with tuna workers in basic communities, endure 90-degree heat in the canneries and struggle with the harsh realities of life on a traditional wooden tuna boat in the western Pacific. The extreme conditions affect them all in many different ways, as do the hand to mouth existence of the workers they live with.

See all episodes from Blood, Sweat and Takeaways