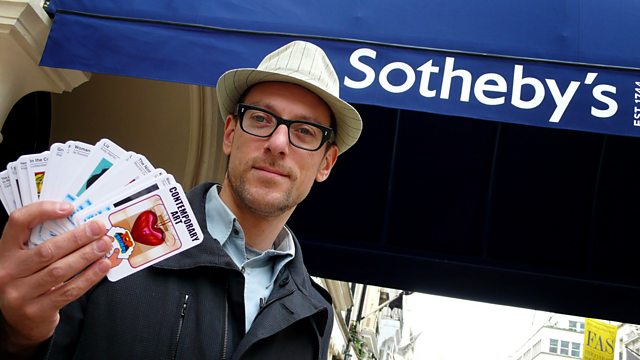 Updated documentary investigating the massive 2003-2008 boom in the contemporary art market, showing how the financial downturn has drastically affected matters.

Art critic and film-maker Ben Lewis spent two years following the contemporary art market, from its heady peak in May 2008 until the crash and burn in October. Now, in a new and updated version of the film first broadcast in May 2009, he returns one year later, in October 2009, to discover a very different market.

The last five years had witnessed an unprecedented craze for contemporary art, in which works of art by Andy Warhol, Francis Bacon, and Mark Rothko sold for record-breaking prices of 30 million pounds upwards. It all climaxed in September 2008, when Damien Hirst sold 111 million pounds' worth of his art at an unprecedented auction at Sotheby's - the very day Lehman Brothers collapsed bringing down the financial markets of the western world. The bubble did not burst the night of the Hirst sale - but it proved to be a last hurrah.

The auctions in October and November 2008 were a disaster, and Ben was there too, filming the art world in shock. By early 2009, the contemporary art auction market was down 75 per cent, auction houses had recorded record losses and were rapidly downsizing.

In October 2009, Ben returns to find out what has been happening.

In this inside eye-witness journey into the art world, Ben visits auction houses, art fairs, galleries and the homes of billionaires across the world, searching for the reasons behind the greatest rise in financial value of art in history. He interviews leading dealers, art collectors and art market analysts and discovers an extraordinary world of unusual market practices, speculation, secrecy and a passionate enthusiasm for art.