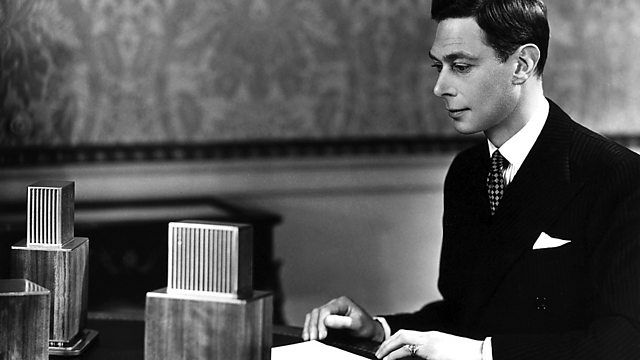 Newly crowned George VI battles to overcome his stammer ahead of his broadcast to the Nation and Empire. Stars Alex Jennings.

The action of A King's Speech takes place on Coronation Day, 12th May 1937, and deals with King George VI's preparations for his evening BBC Radio broadcast to the Nation - a terrifying prospect for perhaps the most notable Briton to have suffered from a stammer.

The Coronation Ceremony in Westminster Abbey completed, the new King must face a further challenge - the dreaded royal broadcast, to be delivered under the watchful gaze of the BBC's first Director General, Sir John Reith himself. As the tension mounts, speech therapist, Lionel Logue (played by Trevor Littledale) must work hard to calm the King's nerves and to prepare him for his ordeal at the microphone. No easy task. As the King says himself, exploding in fury:

"Dammit!! I can't say 'crowned', can't say 'King'! What use is that? The whole speech is a minefield of 'Commonwealths', 'Queens' and 'Kings'! Five hundred and seventy-two words in total, and most of them impossible for me to say!"

The central scenes of the play feature Logue and his pupil. Comfortable in each other's company, they discuss the speech the King must make in a few hours' time. Logue's working methods are revealed: the tongue-twisters, breathing exercises, Shakespearean quotations - all designed to relax the speaker. The King's dependence on, and great friendship with Logue becomes apparent. Their conversation is wide-ranging, dealing with, among other things, the Abdication Crisis; George VI's childhood - when being both left-handed and a stammerer was frowned on; the King's envy of his elder brother; and his uneasy relationship with his father, King George V.

This is Mark Burgess's sixth play for BBC Radio 4, all of which have dealt with prominent people at pivotal moments in their lives.

On the Field - Endgame