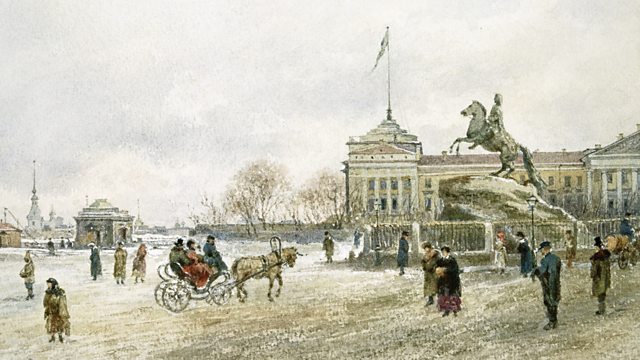 The Building of St Petersburg

Melvyn Bragg and guests discuss the building of St Petersburg, Peter the Great's showcase city for a modern, European Russia.

Melvyn Bragg and guests discuss the building of St Petersburg, Peter the Great's showcase city for a modern, European Russia. It is a city of ideas. of progress and the Baroque, of Russian identity and Tsarist power. The building of St Petersburg is a testament to Tsarist power but it is also a city of ideas; of progress, of the Baroque and Russian identity. Beset by fire and flood, the city was founded by Peter the Great in 1703 to symbolise a new Russia, one that faced away from the Slavic East and towards the European West. To this end Peter and his heirs imported European architects, craftsmen and merchants to fashion his new capital.The result is a grandiose European city set amidst the freezing swamps of the Baltic coast; a Venice or Rome of the North. Indeed, the Venetian art connoisseur, Francesco Algarotti called St Petersburg ‘a window through which Russia looks on Europe’. It is a city of beauty built upon the cruelty of a tyrant and to this day encapsulates many of the contradictions of Russia.With Simon Dixon, Sir Bernard Pares Professor of Russian History at University College London; Janet Hartley, Professor of International History at the London School of Economics; Anthony Cross, Emeritus Professor of Slavonic Studies at the University of Cambridge

The Vacuum of Space