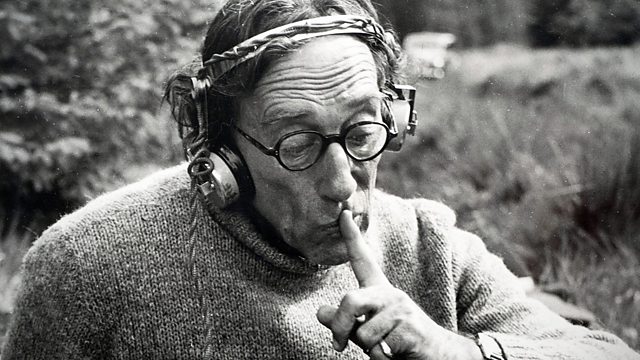 Ludwig Koch and the Music of Nature

Sean Street explores the life of Ludwig Koch, pioneering nature broadcaster, who came to Britain escaping the Nazis. From 2009.

Ludwig Koch was once as famous as David Attenborough, as pioneering as 'Blue Planet' and as important as the BBC Natural History Unit. They all owe their existence to this German refugee who first recorded the music of nature. Through his archive and new field recordings the poet Sean Street tells the story of Ludwig Koch.

When Sean Street was recording in a store-room at the Science Museum for a Radio 4 archive programme he came across a grey crate, stencilled, as if it belonged to a band on tour, with KOCH on it. This was the disc-cutting machine which Ludwig Koch used for a decade to make the recordings of birds, mammals and insects that led to a new field of study, of broadcasting and the creation of the BBC's Natural History Unit.

Sean and his producer then began investigating and discovered that Koch made the first ever wildlife recording, of a bird, when he was eight, in 1889 - and that it still exists in the BBC's archives.

Koch was an effusive man and this led to several confrontations with Nazi officials, whom he despised. There is an extraordinary recording of him telling the story of a Berliner whose bullfinch sang 'The Internationale'. He was carted off to prison and the bird 'executed'. "Under dictatorship," Koch observed, "even songbirds suffer". He came to England, worked with Julian Huxley on theories of animal language, and recorded birds from the Scillies to Shetland.

In 1940 he joined the BBC and soon became a household name, beloved of comedians (there's a great sketch by Peter Sellers parodying him at work) because of his resolute pronunciation of English as if it were German.

As well as being wonderful radio in itself his work was of great significance. It inspired producer Desmond Hawkins to start 'The Naturalist', (using Koch's enchanting recording of a curlew as its signature tune). Sean Street uses his recordings and contributions of those who worked with him in what becomes a natural history programme in itself, with Koch the subject and Sean exploring his habits and habitat.

There is also an attempt to record curlews as he did so successfully, to shed light on the achievements of this courageous, influential and loveable genius. Today sound-recordists use tiny digital machines and sophisticated microphones. But there are other problems - traffic, planes, people - and fewer, shyer curlews.