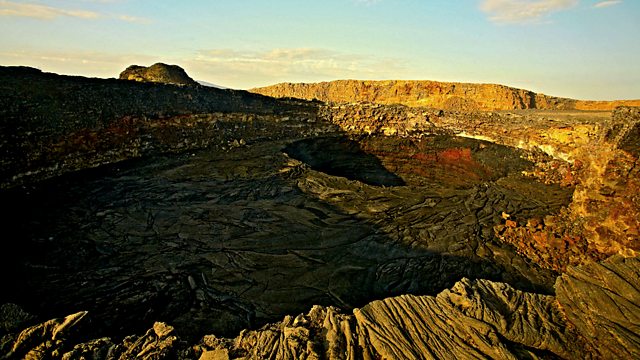 Hottest Place on Earth
Episode 2 of 2

An insight into the geology and people of the Danakil desert in Ethiopia. Kate Humble investigates how tough life is for an Afar woman. Dr Mukul Adarwal looks at health issues.

The series takes a team of experts and explorers into the Danakil desert in northern Ethiopia to investigate the incredible geology of the area, and to find out how the people and their animals survive in the hottest place on earth.

Kate Humble investigates how tough life is for an Afar woman; Steve Leonard wants to learn about the relationship between the Afar and their animals, and to help with animal medicine where he can; and Dr Mukul Agarwal looks at the health issues faced in this most hostile of environments.

Earth scientist Dougal Jerram looks at the extraordinary volcanic activity of the region and the part it plays in the bigger geological picture of the Rift Valley, while biologist Richard Wiese searches for extreme life forms in the boiling soil of a massive volcanic fissure.

See all episodes from Hottest Place on Earth