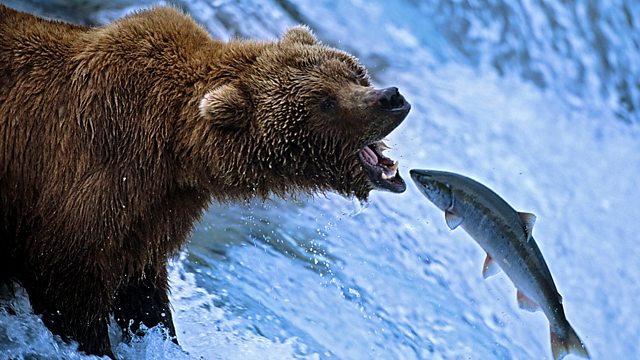 Nature documentary looking at the annual return of hundreds of millions of salmon from the Pacific Ocean to the mountain streams where they were born.

Every year grizzly bear families in North America depend for their survival on a spectacular natural event: the return of hundreds of millions of salmon from the Pacific Ocean to the mountain streams where they were born. The salmon travel thousands of miles to spawn and then die. The great run not only provides food for bears, but for killer whales, wolves, bald eagles, and even the forest itself. The question is: will the salmon return in time to keep hungry bears alive?

A mother grizzly and her cubs emerge from their den high in snowy Alaskan mountains. Filming from the air, the team capture a TV first, following the bears as they negotiate a near-vertical slope on their journey to the coast where they await the return of the salmon.

Meanwhile, the salmon are making their way to the river mouths where they must swim upstream and against the current. The programme reveals how they tackle the torrents and leap over waterfalls, a feat equivalent to a human jumping over a house.

Dozens of hungry bears eagerly await the salmon that make it up river. In another TV first, underwater cameras record the ingenuity and fancy footwork they use to collect dead salmon from the bottom of deep pools.

In the final ten-minute diary, Close Encounters of a Grizzly Kind, wildlife cameraman Jeff Turner, who has filmed bears for 20 years, reveals how he pioneered techniques to show for the first time how bears caught salmon underwater.

See all clips from The Great Salmon Run (2)