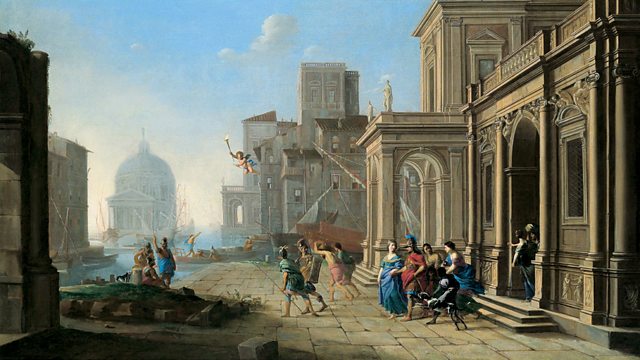 Melvyn Bragg and guests discuss the complete destruction of Carthage by Rome, a pivotal moment in world history.

Melvyn Bragg and guests discuss the Destruction of Carthage. The North African city of Carthage was rich and powerful, but in the second century BC it suffered a terrible fate. The Greek historian Appian wrote about it: “Then came new scenes of horror. As the fire spread and carried everything down, the soldiers did not wait to destroy the buildings little by little, but all in a heap. So the crashing grew louder, and many corpses fell with the stones into the midst. Others were seen still living, especially old men, women, and young children who had hidden in the inmost nooks of the houses, some of them wounded, some more or less burned, and uttering piteous cries.”When the Romans finally conquered their great enemy in 146 BC, they razed it to the ground, sold off its library and tried to destroy not merely the city but the civilisation based upon it. Carthage was removed from history with such effect that it’s hard to know the city save through Roman eyes.It was a pivotal moment in world history that left Rome as the supreme power in the Mediterranean but after it was gone the ghosts of Carthage haunted Rome and seemed to hint at Rome’s own fate. With Mary Beard, Professor of Classics at the University of Cambridge; Jo Quinn, Lecturer in Ancient History at the University of Oxford and Ellen O’Gorman, Senior Lecturer in Classics at the University of Bristol

The Observatory at Jaipur