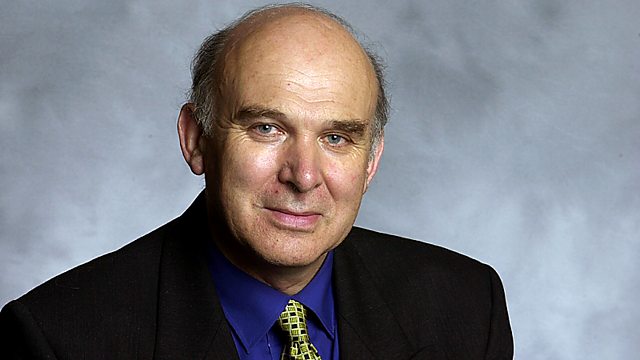 Kirsty Young's castaway this week is the Liberal Democrat Treasury Spokesman, Vince Cable. He studied economics at Cambridge and had a rich career before entering parliament in 1997. Now, he's become something of a media darling; seen by many as one of the few people able to understand - and make credible suggestions about - the current financial crisis.

In this personal interview, however, politics is largely set aside and instead Vince describes the home-life that shaped him as he grew up and the rich family life he has enjoyed as an adult. His fiercely ambitious father was an activist for the local Conservative party: he was talented, driven and passionate, but also overbearing and unwilling to hear voices of dissent. Vince dismayed his father by dropping his science degree in favour of economics and later outraged him by marrying his first wife, Olympia, who was from Kenya. Despite his father's view that mixed-race marriages 'didn't work', they were married for more than 13 years and raised their three children together before Olympia's death from cancer. After her death, he says, he envisaged a lonely old-age lay ahead - but an unpromising debate about free trade and agriculture brought him together with his second wife. Now he says he wears both his wedding rings together as a tribute to the two happy marriages he has enjoyed, he continues to go dancing every week with his second wife Rachel, as he did with Olympia and he is, he cheerfully confesses, a romantic.