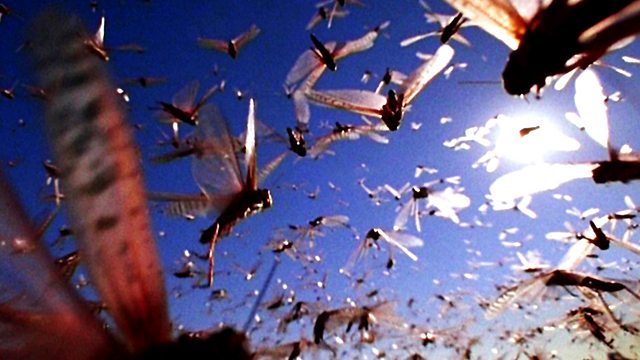 Documentary examining the world of animal swarms, using the latest camera techniques to look into the heart of a superswarm and reveal how they view our world.

This two-part documentary reveals the awe-inspiring world of animal swarms, discovering what happens when superswarms invade people's lives and, using the latest camera techniques, going to the heart of the swarm to reveal how the creatures therein view our world.

Real-life footage from camcorders and mobile phones captures the amazing impact they can have. Killer bees mount an attack on an international football match in Costa Rica. In the US, the Illinois River boils with leaping silver carp, an alien species that has hijacked the river, smashing into boats and injuring people.

In South Australia, a sea of mice raids farms, consuming and destroying in their millions on a scale that defies belief. The largest swarm on Earth erupts from Lake Victoria - trillions of flies blanket villages, but the locals have learnt to turn the swarm into a highly nutritious fly burger. In Rome, cameras fly alongside ten million starlings, the largest swarm in Europe. Their mesmeric waves stop many residents in their tracks, but as they roost they smother the city in tons of excrement.

One man has learnt to control the ultimate swarm. He has become their 'queen bee' with startling results, learning to control what most people fear and to understand one of the most incredible forces of nature.

One Million Heads, One Beautiful Mind