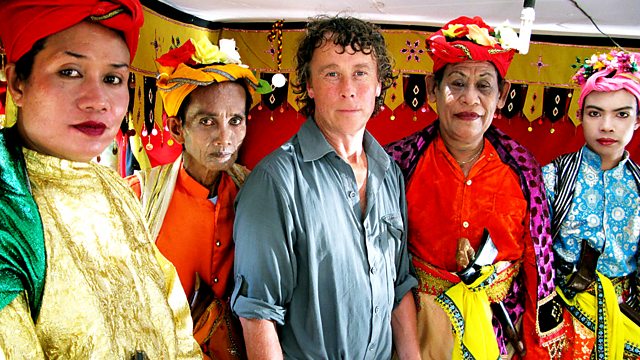 Australasia and the Pacific Ring of Fire

Around the World in 80 Faiths
Episode 1 of 8

Pete Owen Jones presents the definitive guide to faith on Earth. Here, he travels to Australasia to explore tribal faiths.

Pete Owen Jones presents the definitive guide to faith on Earth, with 80 rituals across six continents in the space of a year.

The big six world religions are only part of the story. Faith is belief in the sacred, and it is expressed in a rich diversity of rituals, in denominations, sects, cults, tribal faiths and new religious movements. Pete's mission is to witness and take part in rites rarely filmed before, to take the religious pulse of the planet and to understand the depth of humanity's fascination with the divine. As an Anglican priest, Pete will be confronting cultures that will challenge his values and prejudices - he will be surprised, even offended, but also enlightened.

Pete travels to Australasia to find out how tribal faiths have survived into the 21st century. He goes into the Australian outback in search of the meaning of Aboriginal Dreaming, to Indonesia for the elaborate funeral of a woman who died 20 years ago, to Sydney to witness the survival of ancient persecuted faiths like the Iraqi Mandeans and witchcraft, and to the remote volcanic islands of Vanuatu in the Pacific ring of fire to unravel the mystery of the cargo cult.

See all episodes from Around the World in 80 Faiths