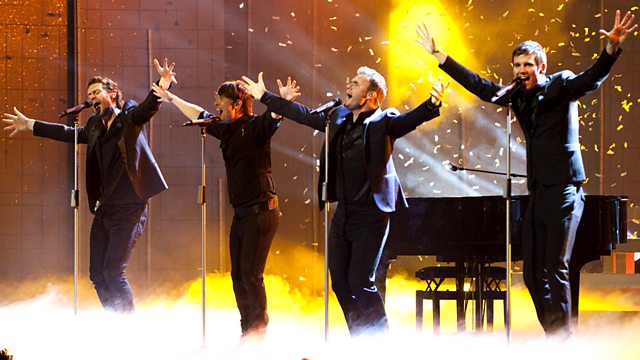 Coverage of the 80th Royal Variety Performance. Performers include Take That, Rihanna, Cliff Richard and The Shadows, Peter Kay, Jimmy Carr and the cast of The Lion King.

A host of celebrities and artists from the worlds of music, comedy and theatre come together for the annual highlight of the showbiz calendar, the Royal Variety Performance. Celebrating its 80th anniversary, the show returns to the iconic London Palladium to be performed in the presence of Their Royal Highnesses, The Prince of Wales and The Duchess of Cornwall.

Headlining for 2008 are pop heart throbs Take That, cementing their place as the UK's comeback kings.

Pop veterans Cliff Richard and the Shadows get together especially for the show as they prepare to celebrate their 50th anniversary and the multi Grammy-nominated Josh Groban and BBC Last Choir Standing victors Only Men Aloud perform a one-off duet.

The Royal Variety Performance is an annual charity event in aid of the Entertainment Artistes' Benevolent Fund.

See all episodes from The Royal Variety Performance