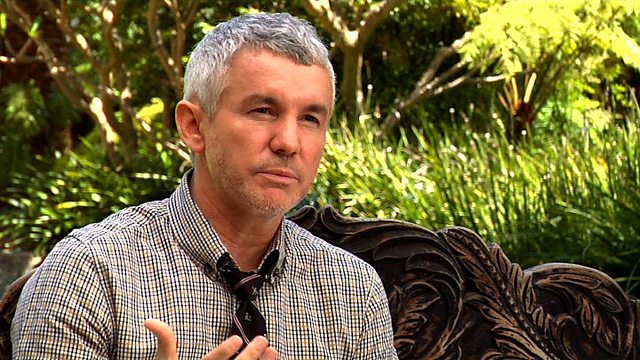 Director Baz Luhrmann talks to Mark Kermode about his next film Australia, a 130 million dollar epic set in northern Australia on the eve of World War II.

The Culture Show takes a look at the cinematic visionary, Baz Luhrmann. The director of Strictly Ballroom, Romeo and Juliet, and Moulin Rouge, Luhrmann deals in colour, romance and spectacle. He has directed La Boheme on Broadway, and had a worldwide hit single with Wear Sunscreen. Now he's embarked on his most ambitious film to date Australia - a 130 million dollar epic set in northern Australia on the eve of World War II, starring Nicole Kidman and Hugh Jackman.

Mark Kermode travels to Sydney to join the director as he races to finish Australia. In the thick of the completion process and facing daunting studio deadlines Baz Luhrmann reveals his hopes and fears for his new film, the most expensive ever to be made in Australia. Mark Kermode is the first critic in the world to be given a glimpse of this 'four years in the making' feature, which is due to open in the UK on December 26th.

In a rare in-depth interview Baz talks about his breakthrough film Strictly Ballroom which took Cannes by storm, became a global hit and has helped to reinvent the Saturday night viewing habits of millions of Britons. He recalls the nerves of steel it took to produce his last film Moulin Rouge, a reinvention of a supposedly 'dead' genre, the musical, and reveals the lengths he went to win studio backing for his daring re-interpretation of Romeo and Juliet.

There are interviews with Australia stars Hugh Jackman and Nicole Kidman about the hardships and joys of filming for three months in the outback, plus contributions from some of Luhrmann's key collaborators including Oscar winning production designer Catherine Martin and scriptwriter Craig Pearce, who together form the creative trio behind the Red Curtain Trilogy: Strictly Ballroom, Romeo and Juliet, and Moulin Rouge.