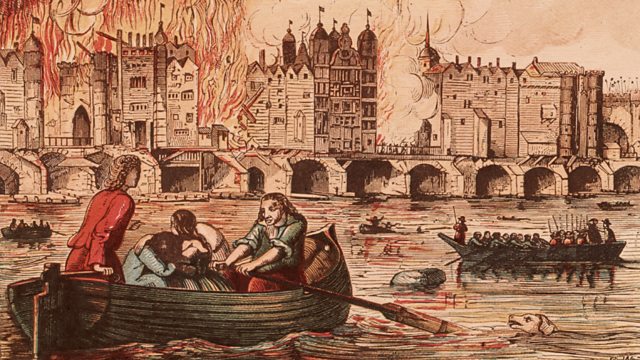 The Fire of London

Melvyn Bragg and guests discuss The Great Fire of London in 1666 and how the city rose from the ashes.

Melvyn Bragg and guests discuss The Great Fire of London which destroyed up to a third of the city in 1666. Samuel Pepys described the scene in his diary:“all over the Thames, with one's face in the wind, you were almost burned with a shower of firedrops…and in corners and upon steeples, and between churches and houses, as far as we could see up the hill of the City, we saw the fire …It made me weep to see it.”The London that rose from the ashes was a visible manifestation of ideas; of the politics, religion, economics and science of the heady Restoration period. Christopher Wren, of course, but also Robert Hooke, The Royal Society, St Paul’s Cathedral, the Restoration court of Charles II and, inevitably, building regulations. With Lisa Jardine, Centenary Professor of Renaissance Studies at Queen Mary, University of London; Vanessa Harding, Reader in London History at Birkbeck, University of London and Jonathan Sawday, Professor of English Studies at the University of Strathclyde

The Physics of Time