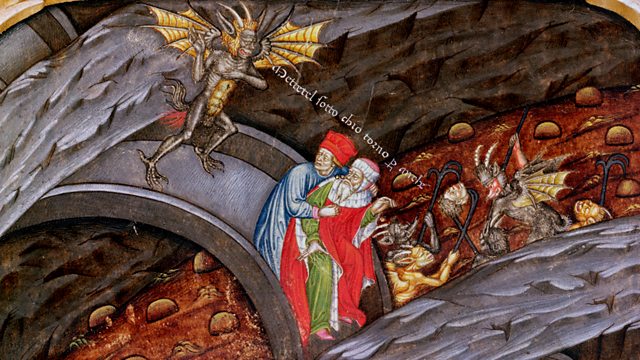 Melvyn Bragg discusses Dante’s ‘Inferno’ - a journey through the nine circles of Hell. Dante was a medieval Italian poet and the Inferno, his greatest work, is a masterpiece of world literature.

Melvyn Bragg and guests discuss Dante’s ‘Inferno’ - a medieval journey through the nine circles of Hell. “Abandon hope, all ye who enter here”. This famous phrase is written above the gate of Hell in a 14th century poem by the Italian poet Dante Alighieri. The poem is called the ‘Divine Comedy’ and Hell is known as ‘Dante’s Inferno’. It is a lurid vision of the afterlife complete with severed heads, cruel and unusual punishments and devils in frozen lakes. But the inferno is much more than a trip into the macabre - it is a map of medieval spirituality, a treasure house of early renaissance learning, a portrait of 14th century Florence, and an acute study of human psychology. It is also one of the greatest poems ever written. With, Margaret Kean, University Lecturer in English and College Fellow at St Hilda’s College, University of Oxford; John Took, Professor of Dante Studies at University College London and Claire Honess, Senior Lecturer in Italian at the University of Leeds and Co-Director of the Leeds Centre for Dante Studies.