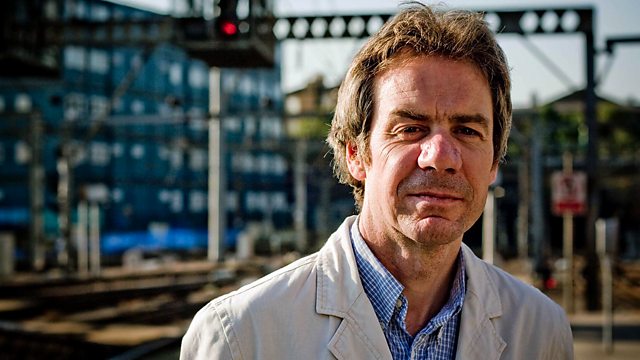 Between the Lines - Railways in Fiction and Film

Novelist Andrew Martin presents a documentary examining how the train came to shape the work of writers and film-makers, from Wordsworth and Dickens to The Railway Children.

Novelist Andrew Martin presents a documentary examining how the train and the railways came to shape the work of writers and film-makers.

Lovers parting at the station, runaway carriages and secret assignations in confined compartments - railways have long been a staple of romance, mystery and period drama. But at the beginning of the railway age, locomotives were seen as frightening and unnatural. Wordsworth decried the destruction of the countryside, while Dickens wrote about locomotives as murderous brutes, bent on the destruction of mere humans. Hardly surprising, as he had been involved in a horrific railway accident himself.

Martin traces how trains gradually began to be accepted - Holmes and Watson were frequent passengers - until by the time of The Railway Children they were something to be loved, a symbol of innocence and Englishness. He shows how trains made for unforgettable cinema in The 39 Steps and Brief Encounter, and how when the railways fell out of favour after the 1950s, their plight was highlighted in the films of John Betjeman.

Finally, Martin asks whether, in the 21st century, Britain's railways can still stir and inspire artists.

How to Be a Good President—Series 8