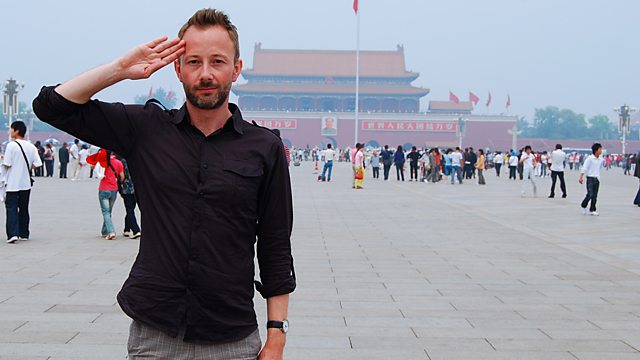 The Culture Show Goes To China

Miranda Sawyer and Tom Dyckhoff visit Shanghai and Beijing to meet the artists, musicians, photographers and architects who are shaping the fastest changing culture in the world.

Miranda Sawyer and Tom Dyckhoff visit the mega-cities of Shanghai and Beijing to meet the artists, musicians, photographers and architects who are shaping the fastest changing culture in the world.

Tom examines the building boom that has changed the face of the two cities. Starting off with Norman Foster's epic Beijing Airport, he previews the Beijing National Stadium, or the Bird's Nest, which will be hosting many of the Olympic events. He also takes a look at the mammoth CCTV building, the new headquarters of Chinese Central Television by Rem Koolhaas and Ole Scheeren, which is set to become one of the most recognisable buildings in the world. Tom then looks at how a young but flourishing design sector is taking the country away from its reputation as being the factory of the world and is now producing consumer goods for a population already demanding western designer products.

Miranda attends a penthouse dinner party hosted by socialite and gallery owner Pearl Lam. While there she meets some of China's leading contemporary artists, writers and designers, including fashion designer Han Feng, famous for her haute couture and ready-to-wear lines.

We sample Chinese music of all types, from Chinese hip-hop and underground DJs, to one of the country's most respected classical composers and conductors, He Zhanhao. China's new wave of young artists and designers are living and working under a regime never far from controversy. We hear from the artists who are relishing working in a country that is in the throes of reinvention.