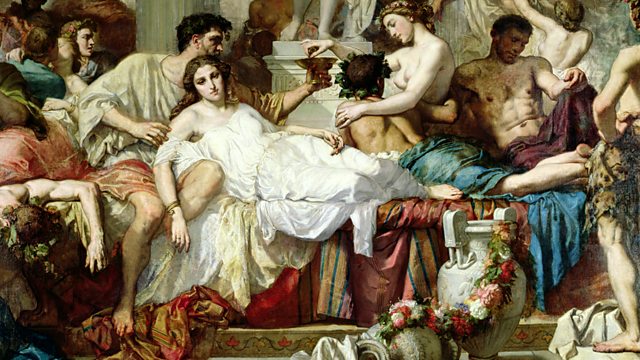 Tacitus and the Decadence of Rome

Melvyn Bragg and guests discuss the Roman historian Tacitus who chronicled some of Rome’s most notorious emperors, including Nero and Caligula, and whose portrayal of Roman decadence influences the way we see Rome today. “The story I now commence is rich in vicissitudes, grim with warfare, torn by civil strife, a tale of horror even during times of peace”. So reads page one of The Histories by the Roman historian Tacitus and it doesn’t disappoint. Convinced that Rome was going to the dogs, Tacitus depicts a Rome which is a hotbed of sex and violence, of excessive wealth and senatorial corruption. His work is a pungent study in tyranny and decline that has influenced depictions of Rome, from Gibbon’s Decline and Fall to Robert Graves’ I, Claudius. But is it a true picture of the age or does Tacitus’ work present the tyranny and decadence of Rome at the expense of its virtues? And to what extent, when we look at the Roman Empire today, do we still see it through Tacitus' eyes?With Catharine Edwards, Professor of Classics and Ancient History at Birkbeck, University of London; Ellen O’Gorman, Senior Lecturer in Classics at the University of Bristol and Maria Wyke, Professor of Latin at University College London